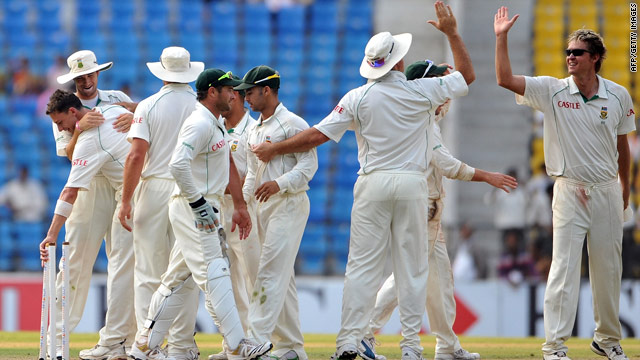 (CNN) -- South Africa comfortably secured a convincing first Test victory over India after mopping up the remainder of the home side's innings in Nagpur on Tuesday.

India were eventually skittled out for just 319 runs, meaning they succumbed by an innings and six runs after being forced to follow on in reply to South Africa's massive first innings total of 558 for six declared on day four.

Spin bowler Paul Harris collected the wicket of century maker Sachin Tendulkar among his three-wicket haul, while a further couple of wickets from paceman Dale Steyn saw him claim 10 wickets in the match in a superb individual display.

The shock defeat, Mahendra Singh Dhoni's first since becoming captain over two years ago, means that India will have to win the second Test in Kolkata to remain top of the International Cricket Council (ICC) Test match standings.

South Africa captain Graeme Smith told reporters: "It's been an outstanding performance from the guys, four days of clinical stuff.

It's been an outstanding performance from the guys, four days of clinical stuff.
--Graeme Smith

"To win here requires a lot of discipline and hard work and the guys showed a lot of consistency. There were some great individual performances which deserve accolades," he added.

Meanwhile, Dhoni admitted the better team had won. "There is no doubt we were completely outplayed in this game," he said.

"And then there was Steyn's performance. I think it was one of the best performances of pace bowling I've seen in the recent past."