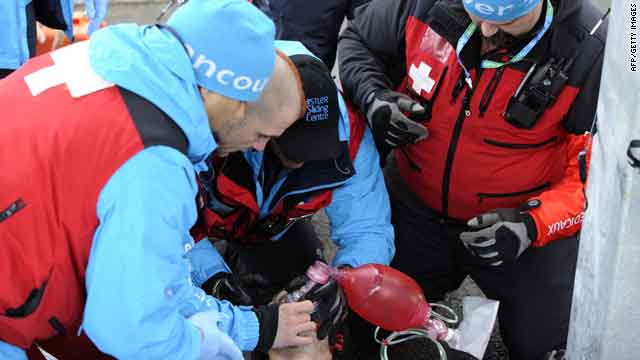 (CNN) -- The death of a Georgian luge athlete Friday ahead of the opening of the 2010 Winter Olympics occurred amid concerns about the speed of the record-setting track at the Whistler Sliding Center, according to a Georgian official.

"There were some questions asked by other athletes even before this tragic accident," said Nikolas Rurua, Georgia's deputy minister for culture and sports, adding that there had been several crashes in the same area. "But at this moment it would be premature for me to jump to any conclusions."

Nodar Kumaritashvili, 21, was on his final official training run when he had a "serious crash" near the end of the 4,500-foot-long course and was propelled off the track, according to the International Olympic Committee.

Video of the crash shows Kumaritashvili lying motionless after being thrown from his sled and striking a steel pole as he was coming out of the course's last turn. He was given CPR by medical staff on site before being transported to a hospital where doctors were unable to revive him, the IOC said.

Kumaritashvili was scheduled to compete in the men's singles luge event, which begins Saturday. The official training session was being held just hours before the opening ceremony for the Winter Games.

An investigation into the cause of the crash is under way, the IOC said, and the track was closed after the accident, Rurua said.

He urged a thorough examination "to prevent devastating events in the future."

The luge is often called the "fastest sport on ice." Sliders use their legs and shoulders to steer small fiberglass sleds down an icy track, at times approaching or surpassing speeds of 90 mph, according to the Vancouver 2010 Winter Olympics Web site. They are positioned on their backs with their feet straight out in front of them and their heads back to be as aerodynamic as possible.

Sports Illustrated's David Epstein, who is covering the Olympics for the magazine, told CNN's "Situation Room" that the Whistler course is the fastest in the world "and not by a little."

He noted that while most luge courses "flatten out" around the 11th turn, the Whistler track "just keeps on dropping, so there's really kind of no break from gathering speed toward the end."

Epstein said some athletes had been complaining about the speed of the course and speculating that this Winter Games could be the first time the sport sees a competitor hit 100 mph.

"That's 15 to 20 mph faster than any course in the rest of the world," Epstein said.

Kumaritashvili was traveling at 88 mph at the time of his crash, Epstein said.

Benshoof said Friday that he had had problems in the lower portion of the track during one of his training runs.

"Because of the physics of the curves, and going at 95 mph, there's a really small margin for error," Benshoof said. "You really need to get it right from curve nine to get as far as curve 13, because once you get to curve 11 and 12, you're going too fast to correct yourself."

Kumaritashvili crashed on the 16th and final turn of the course.

IOC President Jacques Rogge declined to comment Friday on what safety precautions may be put into place pending the outcome of the investigation.

"This is a time of sorrow, not a time to look for reasons," he said during an emotional news conference confirming Kumaritashvili's death. "That will come in due time."

Rurua said members of the Georgian team will dedicate their event performances to their fallen teammate. The somber seven-member delegation wore black armbands to Friday night's opening ceremonies and a black ribbon was tied atop the Georgian flag in tribute to Kumaritashvili. The team received a standing ovation from the 60,000 spectators in attendance.

"It is difficult to remain composed," Rogge said. "This is a very sad day. The IOC is in deep mourning."

Rurua described Kumaritashvili as a "well-qualified" and hard-working athlete from an area of Georgia with a long tradition in snow sports.

He said members of the Georgian team will dedicate their event performances to their fallen teammate.

"[Kumaritashvili] came to Canada with hopes and dreams that this would be a magnificent occasion in his life," said John Furlong of the Vancouver Organizing Committee. "We are heartbroken beyond words to be sitting here."

The last time a luge athlete was killed during an Olympics was in 1964 when the sport was first introduced, Epstein said. Friday's death was the first time an athlete had been killed during the games since 1992, when a Swiss skier crashed into a snow-clearing machine on a public trail while training in the closing days of the games, according to NBC News, the official broadcaster of the Vancouver Games.