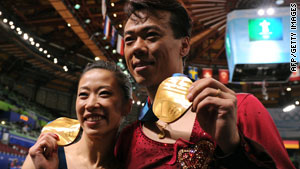 By winning the event, Shen and Zhao captured their country's first gold medal in figure skating and fulfilled a quest that had previously eluded them. The husband-and-wife team had retired from Olympic competition, but was coaxed back by the hope of claiming gold.

China made it a 1-2 finish in pairs skating after Pan Qing and Tong Jian claimed silver, according to the Vancouver Olympics Web site. Germany's Aliona Savchenko and Robin Szolkowy claimed third place and the bronze medal in the event.

In figure skating, China's Shen and Zhao had retired in 2007 after capturing three world championships and two Olympic bronze medalists, making them the most decorated figure skaters in their country's history.

Shen and Zhao were also newlyweds after Zhao proposed to Shen on the ice following a stunning 2007 World Championship performance in Tokyo.

Headlining the popular Stars on Ice tour in the United States, retirement seemed like a natural step for Zhao and Shen. But after just two years away, they declared they would return for the Vancouver Olympics, presumably to capture the gold medal that eluded them.

CNN memories: What was it like to train with Olympic champs?

Zhao and Shen kicked off their comeback fittingly by winning the Cup of China last season. They won all three of their events and set a new world record at the Grand Prix Final.

The pair, formerly ranked number one in the world, opened the Vancouver Olympic figure skating competitions by performing first of the 20 competing pairs. Their draw was considered bad luck, especially because Shen and Zhao currently rank 29th in the world after being away from competition.

Zhao and Shen delivered a near flawless performance in the short program on Sunday, what many skating analysts called their strongest program ever.

"We wanted the program to show all that we have, and we made it," Zhao told the Xinhua news agency in Vancouver following the short program on Sunday. "It's the best gift for the Valentine's Day," Shen added.