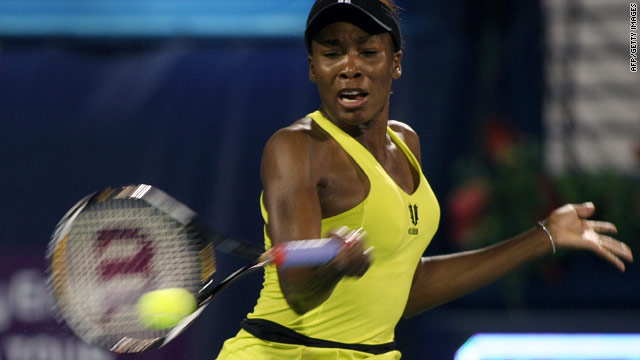 (CNN) -- Defending champion Venus Williams cruised into the last 16 of the Dubai Tennis Championships on Tuesday, but 2008 winner Elena Dementieva was forced to retire in her second-round tie.

World No. 5 Williams, seeded third in the absence of her top-ranked younger sister Serena and No. 2 Dinara Safina due to injuries, crushed unseeded German Sabine Lisicki 6-2 6-3.

The American will next play Olga Govortsova of Belarus, who upset Italian 14th seed Francesca Schiavone with a 6-4 6-4 victory.

Fifth seed Dementieva, who won the Paris Indoor Open title on Sunday, suffered a shoulder injury in her match against Daniela Hantuchova and pulled out while trailing 6-4 1-1.

The Slovakian will next face another Russian following Anastasia Pavlyuchenkova's 4-6 6-1 6-2 win over Tathiana Garbin of Italy.

Top seed Caroline Wozniacki defeated Slovakia's Dominika Cibulkova 6-2 7-6 (7-2) and the Danish world No. 3 will play Israel's Shahar Peer for a place in the quarterfinals.

In the other half of the draw, second seed Svetlana Kuznetsova received a walkover when unseeded Spaniard Anabel Medina Garrigues pulled out with a back injury.

The Russian, who had a bye in the first round as did all the top eight seeds, will face compatriot Regina Kulikova in the last 16.

Fourth seed Victoria Azarenka of Belarus also profited from an injury as U.S. Open quarterfinalist Kateryna Bondarenko of the Ukraine conceded while 4-1 down in the first set.

Sixth seed Jelena Jankovic also progressed after coming from behind to beat France's Aravane Razai 4-6 6-4 7-5. The Serbian, who lives in Dubai, will next play 12th seed Vera Zvonareva, victor at the Pattaya Open in Thailand on Sunday.