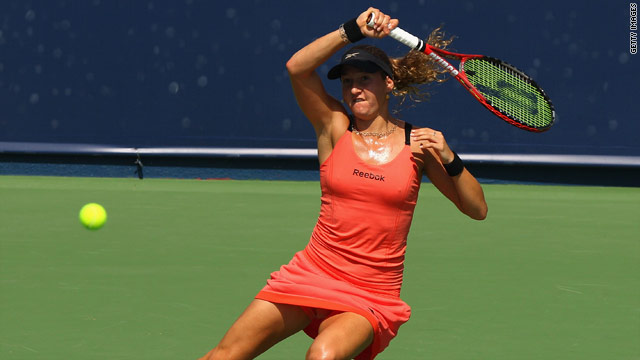 Shahar Peer has made a big impression in her first appearance at the Dubai tournament.
STORY HIGHLIGHTS

(CNN) -- A year after being denied entry due to her Israeli nationality, Shahar Peer has reached the quarterfinals of the Dubai Tennis Championship by knocking out top seed Caroline Wozniacki.

The former soldier became a cause celebre when she was prevented from playing at the WTA Tour tournament due to a lack of diplomatic relations between Israel and the United Arab Emirates, and the rules were changed immediately to allow her to compete this year.

The world No. 22 began the week in fine style when she knocked out 13th seed Yanina Wickmayer in her opening match, then defeated last year's losing finalist Virginie Razzano of France on Tuesday.

The 22-year-old followed that up on Wednesday by eliminating U.S. Open finalist Wozniacki, the top seed in the absence of injured world No. 1 Serena Williams and No.2 Dinara Safina.

She played well today. She was changing the rhythm and going in and attacking the balls
--Caroline Wozniacki
RELATED TOPICS

Peer avenged her defeat to the Dane at the Australian Open last month as she won 6-2 7-5 to set up a last-eight clash with eighth seed Li Na of China.

"She played well today. She really did," Wozniacki, who suffered her first loss in four meetings with Peer, told the tournament's official Web site. "She was changing the rhythm and going in and attacking the balls.

"At the beginning I was making too many unforced errors, and afterwards I started to get into the game. And then, you know, we had a lot of long rallies and I didn't take many chances. I had my chances, especially in the second set, and I didn't take them."

Na progressed from the brink of defeat as she won 3-6 7-5 6-0 against French 11th seed Marion Bartoli, who served for the match at 5-3 in the second set.

Second seed Svetlana Kuznetsova also crashed out, with the Russian losing 5-7 7-6 (7-2) 6-4 to unheralded compatriot Regina Kulikova in what was her first match of the tournament after an opening-round bye and then a walkover win on Tuesday.

The 21-year-old Kulikova, who had to come through qualifying, will next play Agnieszka Radwanska after the Polish seventh seed defeated Italy's Flavia Pennetta 6-3 6-0.

Defending champion Venus Williams won her second successive match with ease, beating Olga Govortsova of Belarus 7-5 6-0 to set up a quarterfinal with world No. 38 Anastasia Pavlyuchenkova and a possible semifinal with Na or Peer.

The winner of their match will face Kulikova or Radwanska in the last four.