In women's hockey, domination is cause for concern 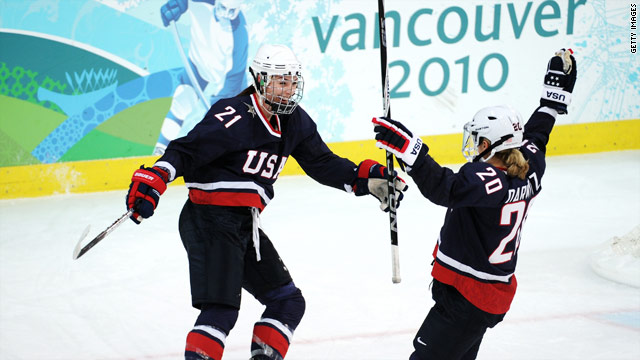 The United States team outscored its opponents by 30 goals.

In this country where emotions and conversations are tied to the results of the men's game, the women's team's dominance has been a little embarrassing.

"After witnessing the early routs at the hands of the Canadian and U.S. women's hockey teams, it's hard to see how these predetermined massacres can be deemed sporting. A sport dominated so comprehensively by two teams, year after year, can barely be considered a competition. For Canada then to celebrate so fulsomely over such hollow victories speaks poorly about us," a resident of Abbotsford, British Columbia, wrote in a letter to the editors of the Vancouver Sun.

Video: Ohno makes Olympic history
After witnessing the early routs at the hands of the Canadian and U.S. women's hockey teams, it's hard to see how these predetermined massacres can be deemed sporting.
--Letter to editors of the Vancouver Sun
RELATED TOPICS

Women's hockey is being contested for the fourth time at the Olympics, and Canada, which has won two golds and one silver, is a sure thing to meet the United States in the final.

The issue is how long will women's hockey stay in the games? Will it get the boot one day as softball did after the 2008 Beijing Games? Or will it be like soccer, with other nations eventually catching up to the powerhouses?

Rene Fasel, the president of the International Ice Hockey Federation, said women's Olympic hockey will be on the program for the Sochi Games in 2014.

"It will be our task to help other federations. We have to go through this," Fasel said Thursday. He said there were similar blowouts in the early days of the men's tournament. The women will make faster progress, he said.

But hockey journalists are concerned.

"Actually, the gap in talent is widening," said Toronto Sun columnist Steve Simmons. "The Canadians and U.S. have improved more than other countries."

The younger North American players, many of whom started off playing with boys, are much stronger and faster than the members of the teams in the 1998 Olympics, he said. Other countries haven't kept up.

There are also U.S. colleges that have funded teams and Canadian women are flocking to schools in the States to get hockey scholarships, Simmons said.

Russian players would also love to come to the United States, but they have a six-team league where players make a small stipend. The NCAA looks at it as a professional league.

"They just close this road for us. There are a lot of hockey girls right now in Russia who want to play in the U.S.," Russian winger Iya Gavrilova told Sarah Kwak of Sports Illustrated. "Like [Alexandra Vafina]. She wants it so bad, but she can't because everybody's saying it's pro hockey."

SI.com: Next host of Winter Olympics no fan of women's hockey

The program in Russia, like many countries, is stymied by a chauvinistic lack of funding.

Julie Foudy, a longtime member of the U.S. Soccer team and now an ESPN commentator, said she understands how the players on the U. S. and Canadian teams feel. In the early 1990s, her teams were similarly dominant, especially when they played in World Cup qualifiers. It will take two things -- time and a shifting of mind-sets -- for the lesser teams to catch up, she said.

She said when she was a player, opponents would tell her that it took the exposure of major tournaments for people to realize that women can compete on a high level. By seeing how good the U.S. players were, officials in other countries softened their positions on women playing sports.

"It becomes more acceptable," Foudy said by phone. "They change their attitudes and say, 'Why aren't we better at that?' "

With time, she said, those changes translate into an increased effort to bolster the national team.

Meanwhile, the hockey coaches and players from the United States and Canada defended themselves after the blowouts.

It's a matter of respect for the game, U.S. coach Mark Johnson said.

"Their players are doing the same thing as our players and living the Olympic dream," he said.

Canadian coach Melody Davidson said it is a "no-win situation" and that critics should afford women the same forbearance shown for the men's game.

"It seems like there is a lot more patience on one side of the puck," she told the Globe and Mail of Toronto, Ontario. "We didn't come here to put on a second-class show. We came here to play our best."