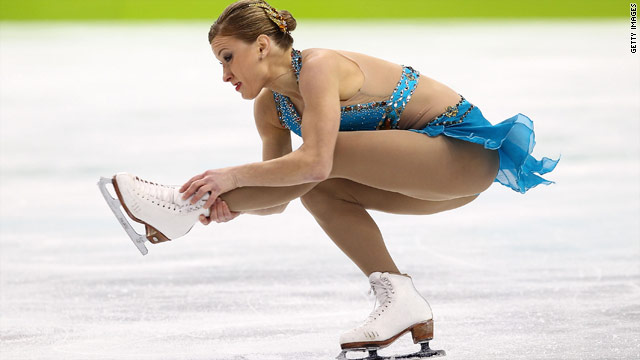 Vancouver, British Columbia (CNN) -- Holding the Olympic medal she and her mom always wanted, Joannie Rochette finally smiled and talked about when she was a young skater and desperately wanted to make her mother proud.

She wasn't the best "coach," and she was kind of picky, but she had such a good eye, Rochette said. She was always encouraging, too, even when she was finding fault.

"And even though she's not here anymore, I'm not afraid to say it, sometimes she was a pain in the ass," Rochette said laughing, probably for the first time in days.

Without her mother to support her, Joannie Rochette skated into Canada's collective heart by relying on all those years of training, all those years of committing jumps and spins to muscle memory. And when she needed it most, she relied on the memory of how her mom would always convince her that she was going to be on the Olympic medals podium.

She was my biggest fan, my best friend. She was with me every step of the way.
--Joannie Rochette
RELATED TOPICS

"It feels good for me to talk about her," she said, joyfully recounting the many times her mom took her to practice and stay when the other moms left. She laughed when she told how her mom would assess a school test score of 98 with a "What about those other two points?"

"She was my biggest fan, my best friend. She was with me every step of the way," she said.

When things weren't going so well in the first week Rochette was here for Olympics training, she called her mom, seeking her advice on what to do about her triple Lutz. Her mom assured her it would be all right, that she just needed to visualize doing it well in her head, that this was something she had done for years.

But doing what she did this week was something no person can ever be prepared for. To compete in the spotlight of the Olympics' marquee event, in front of an expectant and hopeful home crowd, with the heartache of her mother's death so present would take strength most of us cannot imagine. But the people closest to her knew she had that strength.

Her coach, Manon Perron, said there was never any doubt that Rochette would skate and never a doubt that she wouldn't be standing on the medals podium.

"Never ... because she was so ready and the goal was so strong," Perron said, just like a proud mom. "I've been with her since she was 12 so we just have to look into each other's eyes and we know right away. It was really hard on her because her mom was the biggest thing in her life, but she's not a quitter."

Rochette said she struggled more than she showed during Tuesday night's short program that captivated the skating world. When she stepped on the ice, her legs were shaking, she said.

"I don't know how I ever got through this whole program. I'm sure my mom was there with me," she said.

Rochette was third after the short program -- 7.14 points behind Kim Yu-Na of South Korea and 2.42 points behind Mao Asada of Japan -- who skated just before her. The free skate scores are weighted more and account for roughly two-thirds of a skater's total.

Kim made it impossible for Rochette to dream of gold with an amazing free skate that was the best ever under the 6-year-old scoring system -- 150.06. The score was so high it would have beaten seven skaters' combined marks on its own. Her total of 228.56 is also a record.

Asada then put up a 131.72, virtually clinching silver.

Rochette came on the ice, looking determined, to the hockey-like cheers of the 14,000 at Pacific Coliseum. She needed a perfect skate for silver but on a triple flip, she stumbled and her chance for second place slipped away.

Later in the program she had a bit of a shaky landing after another jump, but she stayed on her feet.

After she finished she blew a kiss into the air, and came to the waiting area where she, in French, covered her heart with her right hand and spoke to her mother.

Joannie Rochette opted to stay in the games, and two days later stirred a crowd with a courageous performance.

"Her mother is inside her heart and soul, so she'll be there for her," her agent Dave Baden told CNN on Wednesday, "and [Joannie] will draw from that strength."

Joannie Rochette rose through the ranks of Canadian skaters, winning junior national titles before winning six straight senior national championships from 2005 to 2010. In 2006, she placed fifth at the Winter Olympics in Turin, Italy, and last year she finished second at the World Figure Skating Championships in Los Angeles, California.

Liz Manley was the last skater to medal for Canada, earning silver at the 1988 Calgary Games.