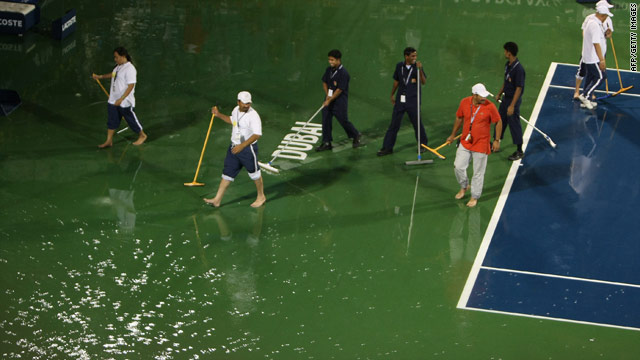 (CNN) -- World No. 2 Novak Djokovic was on track to defend his Dubai Tennis Championship title when torrential rain, thunder and lightning halted play in Saturday's final against Mikhail Youzhny.

The Serbian led 7-5 2-0 when the heavens opened on the desert emirate and flooded the court, and after a long delay it was decided to resume play on Sunday afternoon.

Top seed Djokovic won a topsy-turvy first set in 63 minutes as there were five breaks in serve overall, then rain forced a half-hour delay.

He was 30-15 up in the third game against the Russian seventh seed when the weather intervened again, and umpire Mohamed Lahyani ruled that the court was too wet for further play.

Workers tried to clear the water, but to no avail.

Djokovic is seeking to avenge his semifinal defeat by Youzhny at the World Tennis Tournament in Rotterdam a fortnight ago and claim his 17th ATP Tour title.

Youzhny lost to Robin Soderling in the Dutch final after suffering a hamstring injury, leaving him with five career titles.

Meanwhile, world No. 7 Elena Dementieva will face fellow Russian Alisa Kleybanova in Sunday's final of the inaugural Malaysian Open as she seeks to win a third title this year.