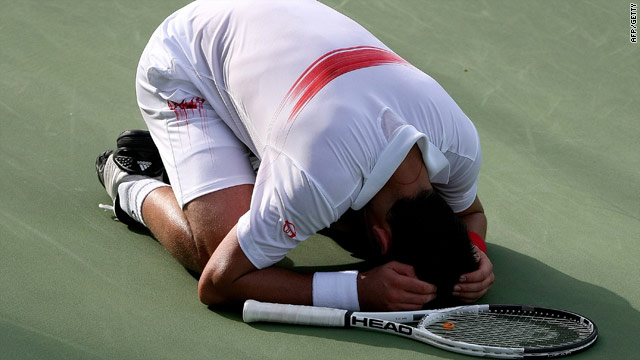 A weary Djokovic shows his relief after finally seeing off the challenge of Zouzhny in Dubai.
STORY HIGHLIGHTS
RELATED TOPICS

The world number two had led by a set and a break when torrential rain halted the match on Saturday but when play resumed in hot and sunny conditions 24 hours later it was Russian Zouzhny who came out firing.

He broke back to level at 4-4 and was then handed a further break as Serbian Djokovic double-faulted twice and was given a warning for racket abuse.

However, Zouzhny made a hash of it serving for the set and the scores were level again at 5-5.

But he was not to be denied as he broke Djokovic to love and then held his own delivery to level at one set all.

In a topsy-turvy match, it was the defending champion who gained the early advantage in the decider, only to be pegged back again.

Youzhny had a break point to go 4-3 up, but wasted it and was made to pay the price.

In the following game he was broken when he hit a forehand long and Djokovic served out for his first official title of the year.

"I was thinking about people who bought tickets and wanted to stay a bit longer, and I really don't know what's going on," Djokovic said in jest after coming close to losing his title.

"Today I was really nervous before the match, during the match for no reason. You could see my frustrations," he added.

The hard-fought victory consolidates his number two ranking behind Roger Federer, who pulled out before the start of the $2 million tournament with a lung infection.

World number three Andy Murray went out early in a tournament of upsets with Zouzhny, who has a good record in Dubai, coming through from the Briton's half of the draw to face Djokovic in the final.

Djokovic now heads to lead his country's Davis Cup campaign against the United States in Belgrade later this week.

On the women's WTA Tour there was a first title for Russia's Alisa Kleybanova who beat top seed and compatriot Elena Dementieva 6-3 6-2 in the final of the Malaysian Open.

The 21-year-old Kleybanova was always on top either side of a 95-minute rain delay and wrapped up victory in one hour 40 minutes.