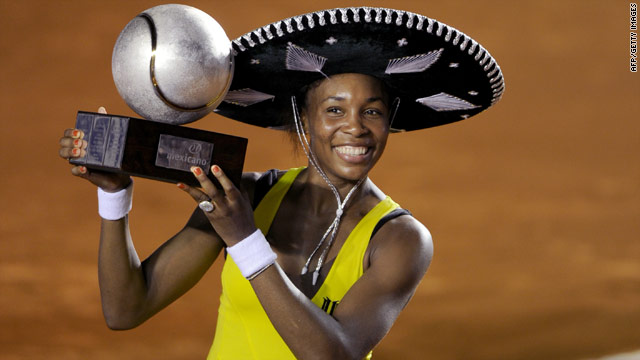 Venus Williams was delighted after winning two tournaments in a row for the second straight year.
STORY HIGHLIGHTS

(CNN) -- Venus Williams is looking forward to a continuing her winning run after retaining her Abierto Mexicano Telcel title in Acapulco on Sunday.

The American followed up her victory at the Dubai Tennis Championships the previous weekend to win both tournaments for the second year in a row, taking her up to equal 10th on the all-time women's list of WTA Tour wins.

Top seed Williams had to come from behind against first-time finalist Polona Hercog on the red clay before triumphing 2-6 6-2 6-3.

"I don't want to stop here -- hopefully next year I can win this one three times," former world No. 1 Williams told the WTA Tour Web site.

"I definitely expected her to play tough. She didn't miss too many shots and I have to give her credit, not just for today but for her whole week. Even though she was playing well, I had to find a way to make my game better.

"Hopefully I'll win more and more this year. I love winning titles, I love seeing that number go up. It feels good. There is no limit. Who wants to have a limit on titles? Not me."

Hercog did, however, win her first senior title in the doubles, as the Slovenian world No. 60 teamed up with Barbora Zahlavova Strycova of the Czech Republic to defeat Italians Sara Errani and Roberta Vinci in three sets.

Former world No. 1 Ferrero had been seeking his third title of the four-week South American leg of the ATP Tour, having also won in Costa do Sauipe in Brazil.

There are no individual top-level men's tournaments this week as the focus switches to the opening round of the Davis Cup, with defending champions Spain hosting Switzerland and runners-up the Czech Republic away to Belgium.

Croatia, beaten in the last four by the Czechs, are at home to promoted Ecuador while fellow semifinalists Israel travel to Chile.

Other World Group matches see France take on Germany, the United States visit Serbia, Russia at home to India and Sweden against Argentina.