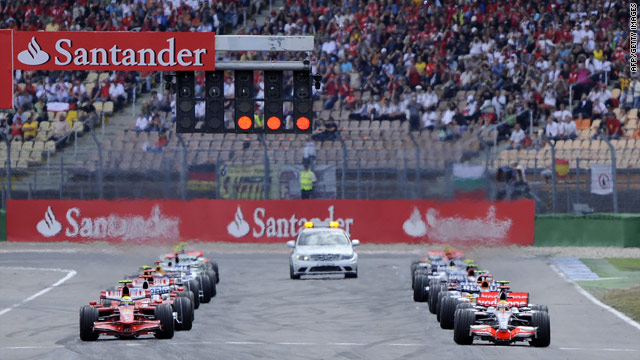 The 2010 Formula One grid will have 24 cars after the US F1 team were omitted from the official entry list.
STORY HIGHLIGHTS
RELATED TOPICS

(CNN) -- Motor Sport's governing body, the FIA, have formally confirmed the entry list for the 2010 Formula One season -- with potential newcomers US F1 omitted from the grid.

The financially-troubled team had asked the FIA if they could miss the first four races of the season in order to attract extra sponsorship, but have instead been told that they must re-apply if they are to be on the grid for the following season.

Three new teams are lining up -- Lotus, Virgin Racing and Hispania Racing -- with Toyota deciding to leave the sport.

There are also two team name changes. Last year's winning constructor's Brawn GP have been taken over by Mercedes, while BMW Sauber have reverted back to being the Sauber team, although they have to retain the BMW title for this season due to legal obligations.

Meanwhile, there is also no place on the grid for the proposed Serbian-backed Stefan GP team, who had been hoping to gain a late entry in place of US F1.

An official FIA statement read: "The US F1 Team have indicated they will not be in a position to participate in the 2010 FIA Formula One world championship.

"Having considered the various options, the FIA confirms it is not possible for a replacement team to be entered for the championship at this late stage.

"In the coming days the FIA will announce details of a new selection process to identify candidates to fill any vacancies existing at the start of the 2011 season."

US F1 have faced a race against time to have their car ready for the grid, after a number of sponsors opted to pull out the project.

Production of the car had been stopped with the team struggling to pay wages, resulting in a number of staff choosing to leave.

Team principal Ken Anderson is yet to comment on whether he will attempt to make the grid for the 2011 season.

The decision leaves Argentinian Jose Maria Lopez, who had already been offered a drive with US F1, without a team.

Tuesday also saw the final driver appointment confirmed, with Karun Chandhok becoming the second Indian to compete in the sport having been named by Hispania Racing.

The 26-year-old follows in the footsteps of Narain Karthikeyan, who had one season with Jordan in 2005.

There will be four world champions on the grid; Jenson Button, Lewis Hamilton, Michael Schumacher and Fernando Alonso, while 11 of the 24 drivers have experienced winning a grand prix.