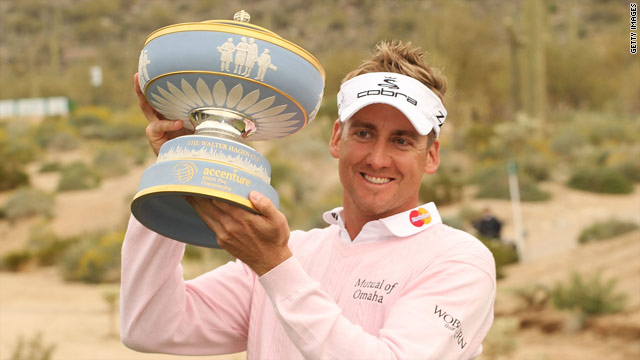 (CNN) -- Ian Poulter can become the top-ranked European golfer for the first time in his career if he can clinch his second world title of the season in Florida this week.

But it seems the Englishman is still starstruck from the goodwill messages he received after securing his first Accenture Match Play title in Arizona in February.

The world number five told the European Tour: "Greg Norman gave me a call, Nick Faldo dropped me a line and Arnold Palmer wrote me a letter. I can't express how much it means. It's just so nice -- Greg was just off to Asia and took time out of his schedule to call.

"And when Arnie sends you a letter to say he was watching and 'congratulations, well played' it can't really get better than that.

"I was asked the question straight after I won what it meant and I couldn't answer it, but when you have people you've admired and followed contacting you and saying the things they said, it's great."

Poulter also revealed European Ryder Cup captain Colin Montgomerie has been in touch to congratulate him after he secured English golf's biggest individual prize since Nick Faldo won the 1996 Masters.

He said the victory, which boosted his ranking in the Ryder Cup standings, has relieved some of the pressure he might otherwise have felt leading up to this year's event in Wales.

"I can have fun and I've never had that mindset in a Ryder Cup year," he added. "Winning such a big event so early in the year has taken the pressure off and that's massive."

After the WGC-CA Championships in Florida, which began Thursday, Poulter will firmly set his sights on the first major of the year -- the Masters at Augusta in early April.

"I'm planning to go up there on the Monday and Tuesday the week before," he added. "That way I won't be under pressure the week of the tournament -- if I don't want to play I don't have to."

When Arnie sends you a letter to say he was watching and 'congratulations, well played' it can't really get better than that.
--Ian Poulter

Meanwhile, three-time major winner Padriag Harrington has been invited to the White House to celebrate St. Patrick's Day on March 17.

He told the UK Press Association: "The president is hosting a party for our Taoiseach Brian Cowen and his wife and I'm a guest. I'm looking forward to it -- it's something different.

"You want to meet these people and see what they are like and get your own judgment on things. You can tell a lot when you meet somebody.

"Plus I've never been to the White House. Obviously he is very keen on golf. He's a left-hander, isn't he? I don't know, maybe we will talk about golf. Who knows?"