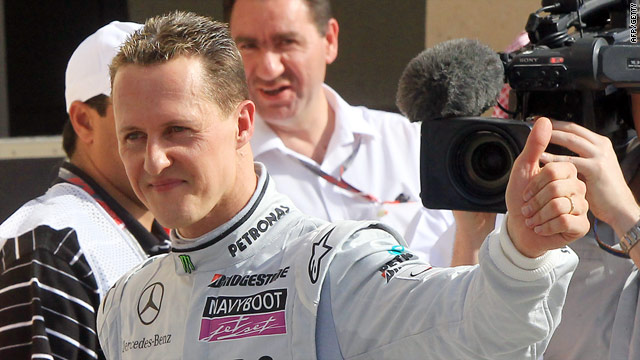 Michael Schumacher gives the thumbs up but he could only manage seventh in qualifying in Bahrain.
STORY HIGHLIGHTS

(CNN) -- The young upstart upstaged the returning legend as Sebastian Vettel claimed pole position for the season-opening Bahrain Grand Prix while returning Michael Schumacher was back in seventh on the grid for Sunday's race.

Red Bull's Vettel finished last season by winning the Abu Dhabi Grand Prix and claiming second in the championship behind Jenson Button and started this year in the same emphatic style.

His best lap of one minute 54.101 seconds was a tenth of a second faster than Felipe Massa in his Ferrari, who was returning to action after his horrific crash at the Hungarian Grand Prix last July.

Massa's new teammate and two-time former world champion Fernando Alonso was third fastest in a good start to the season for Ferrari.

Mark Webber in the second Red Bull edged out seven-time world champion Schumacher with Button eighth on the grid.

But it was Vettel who dominated for his sixth career pole and his pace was demonstrated by the gap to fourth-placed Hamilton of more than a second and 1.4 seconds better than his 41-year-old German compatriot Schumacher.

"For me it is a big surprise and it is clear there are four teams out in front with close performances. So it is thanks to the long night of work the boys did that we have the speed and pole position," Vettel said at his post-qualifying press conference.

Schumacher admitted that he had found his return difficult:

"I didn't really find it easy to find the peak performance and speed of the car in the time available. But I am happy because we are working well as a team. It is a long race and the season is even longer."

While the top teams prospered, the three new lineups, Virgin, Lotus and Hispania, struggled and will occupy the last six places on the 24-car grid for Sunday's 49-lap race at the Sakhir circuit.