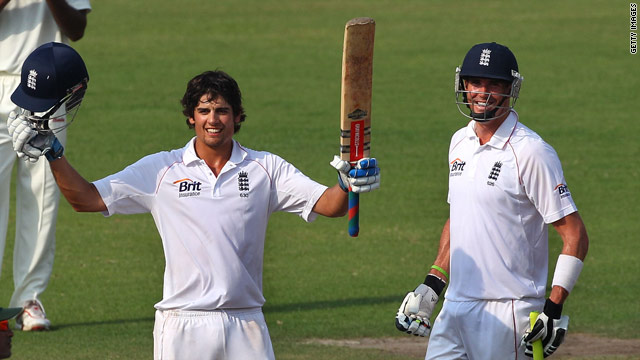 (CNN) -- England captain Alastair Cook scored his second century in successive Tests and shared an unbeaten stand of 167 with Kevin Pietersen as his side beat Bangladesh by nine wickets in Dhaka on Wednesday.

It completed a clean sweep for England in the two-Test series in which Cook has assumed the captaincy mantle while regular skipper Andrew Strauss rested.

Cook ended on 109 not out and Pietersen was unbeaten on 74 as England comfortably reached a last-day target of 209.

They lost Jonathan Trott to a run-out but Pietersen, returning to his best form after a lean spell, and the steadier Cook quickly snuffed out any slight hopes that the home side may have had of forcing a victory.

Cook, who scored 173 in the victory in Chittagong, was scoring his 12th Test ton and fittingly hit the winning runs as he swept Mohammad Mahmudullah for a boundary.

I've enjoyed the challenge and it's been hard work at stages. It's going to help me develop as a person and as a captain
--Alastair Cook
RELATED TOPICS

Pietersen scored at nearly a run a ball and hit nine boundaries and a six.

"There is a lot of things for me to work on as a leader," Cook told AFP.

"I've enjoyed the challenge and it's been hard work at stages. It's going to help me develop as a person and as a captain.

"He (Strauss) is our captain and I can't wait for him to come back."

Bangladesh, trailing by 77 runs on first innings, resumed their second knock overnight on 172 for six wickets and made England work hard for the final four wickets.

Home captain Shakib Al Hasan scored 96, falling four runs shot of a Test century on his 23rd birthday, as he attempted a rash shot to off spinner James Tredwell, who took three of the wickets to fall on the final day.

With Shakib's departure the rest of the tail collapsed and they were dismissed for 285 shortly after lunch.

"We had high hopes but we made some mistakes and that cost us the game," said Shakib.

Meanwhile, the chief executive of Marylebone Cricket Club (MCC) has issued a dire warning that Test cricket could be on the wane in favor of Twenty20.

Forrmer Tasmanian state player Keith Bradshaw told the April edition of Wisden Cricketer magazine, that the future looked bleak for the longer form of the game.

"I consider myself optimistic, but it isn't difficult to look ahead and see the pessimists' apocalyptic version of the future of the game -- where Tests are virtually redundant, Twenty20 saturates and players are globe-trotting mercenaries," he wrote.

Bradshaw's view will alarm traditionalists who fear that Test cricket will be overtaken by Twenty20, which has a huge following with players earning massive salaries by taking part in the Indian Premier League.