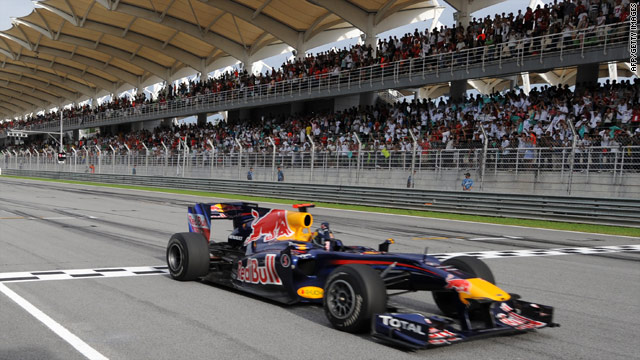 Sebastian Vettel crosses the finish line to secure a comfortable victory in the Malaysian Grand Prix at Sepang.
STORY HIGHLIGHTS

Red Bull have claimed all three pole positions so far this season, with German Vettel heading the grid in the first two races and Webber starting first at Sepang, but had been hit by reliability issues priot to Sunday's race.

However, they finally got their reward this time around, with Vettel outpacing his Australian colleague after the first lap, holding on for a comfortable victory.

Formula One standings after three races

"It was a great race for us and a great result for the team after the last two races when we just didn't get the results we wanted," Vettel told reporters.

Mercedes driver Nico Rosberg claimed third place -- although it proved another disappointing race for seven-times world champion Michael Schumacher who was forced to quit the race early because of suspension problems.

The grid had a lop-sided look to it due to Saturday's dramatic qualifying session which was hit by heavy rain.

It was a great race for us and a great result for the team after the last two races when we just didn't get the results we wanted.
--Sebastian Vettel

This meant the two dominant teams, Ferrari and McLaren, were both towards the rear of the field as the race began and had to weave their way through slower cars in order to get amongst the top 10 for some world championship points.

Meanwhile, Bahrain GP winner Fernando Alonso, who led the championship going into the race, saw his race ended on the penultimate lap due to an engine problem with his Ferrari -- after he had tried to overtake Button.

With Alonso failing to finish in the top 10, therefore missing out on world championship points, Massa's seventh-placed finish proved enough for him to steal the overall lead from his Ferrari teammate

The Brazilian, who has returned to F1 this season after suffering head injuries in an horrific crash last season, lies on 39 points, two ahead of Alonso and Vettel who are tied for second place.

But this season promises to be one of the closest ever with only nine points separating the top seven after three different winners -- Alonso, Button and Vettel -- in the first three races.