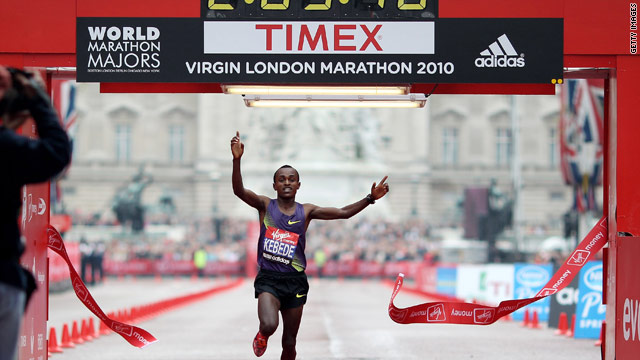 (CNN) -- Last year's runner-up Tsegaye Kebede of Ethiopia has won the 2010 London Marathon in a time of two hours, five minutes and 18 seconds.

Olympic bronze medallist Kebede forced the pace with six miles remaining to finish over a minute ahead of his rivals.

In a 1-2-3 for African nations, Kenya's Emmanuel Mutaim finished second, adding to the silver he won in the world championships in Berlin, with Morocco's Jaouad Gharib in third place.

However, there was bitter disappointment for two of the pre-race favorites for victory.

Defending champion and Olympic gold medallist Sammy Wanjiru -- who has been suffering from a back injury this season -- failed to finish for the first time over the distance when he dropped out with six miles to go after suffering a knee injury.

And world champion Abel Kirui eventually finished fifth despite looking a danger to the first three earlier in the race.

Kebede's victory also halted a six-year domination that Kenyan athletes had on the event.

Meanwhile, the women's race was won by Liliya Shobukhova -- who came home in a time of two hours, 22 minutes, to become the first Russian woman to cross the line first.

The 32-year-old drew clear in the final 2km to add the London title to her victory in the Chicago Marathon last year.

Inga Abitova made it a 1-2 for Russia by finishing second with Ethiopia's Asselefech Mergia in third place.

Elsewhere, world and Olympic sprint king Usain Bolt produced an astonishing final leg run to lead Jamaica to victory over the United States in the men's 4x100m at the Penn Relays in Philadelphia.

Bolt clocked an astonishing 8.79 as he guided the Jamaican quartet to a new meeting record time of 37.90 seconds.