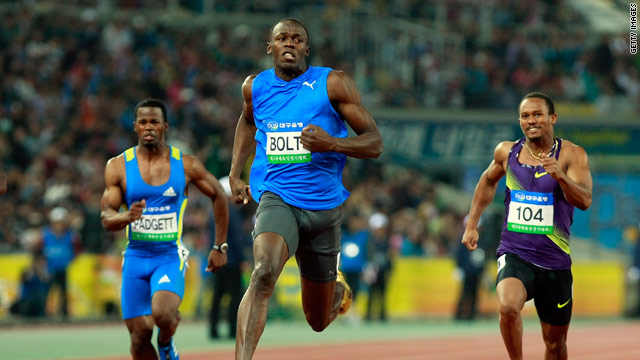 Usain Bolt shows his rivals a clean pair of heels to run the fastest 100m of the year in Korea on Wednesday.
STORY HIGHLIGHTS
RELATED TOPICS

(CNN) -- Sprint-king Usain Bolt showed he could again prove dominant in the sprint distances by running the fastest 100-meters of the year in Daegu, Korea on Wednesday.

The Jamaican, who is world and Olympic champion -- as well as world record holder -- in both the 100m and 200m recovered from a slow start to power to an explosive time of 9.86 seconds.

Compatriot Michael Frater was almost three-tenths of a second slower in 10.15 seconds, while American Mike Rodgers finished in third place.

Bolt will next race in the 200m in Sunday's Diamond League meeting in Shanghai, China.