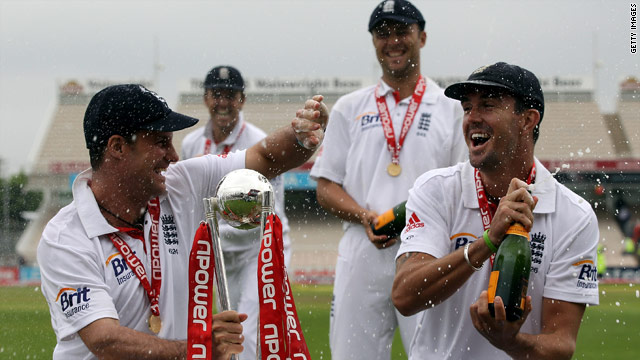 England took all ten of Bangladesh's first innings wicket's in Saturday's final session before repeating the trick as the tourists followed on on Sunday.

Bad weather delayed the start of play at Old Trafford on Sunday, and as a result, England captain Andrew Strauss decided to enforce the follow-on and make Bangladesh bat again.

Trailing by 203, Bangladesh got off to a terrible start when their star batsman, Tamim Iqbal, was caught behind off the bowling of James Anderson on the second ball of the day.

Imrul Kayes was Finn's first victim and he went on to claim his second five-wicket haul in successive Tests by removing Jahurul Islam, Mushfiqur Rahim, Mahmudullah and Shafiul Islam.

The young pace bowler, who plays for Middlesex, has now claimed 19 wickets in his four Test appearances.

Anderson finished with three wickets while Graeme Swann and Ajmal Shahzad got one apiece as Bangladesh were dismissed for just 123, handing England victory by an innings and 80 runs.

After the game Strauss told Sky Sports: "We're not kidding ourselves that we're suddenly world number one. Those last two sessions, taking 20 wickets, is quite a nice way to finish the game and we're happy with our performances over the last two games.

"We're aware there are sterner tests ahead of us but there were a lot of good things to come out of both games."

Finn added: "I bowled better at Lord's and there are a lot of areas to improve - going at more than four an over is not ideal really in a Test match."