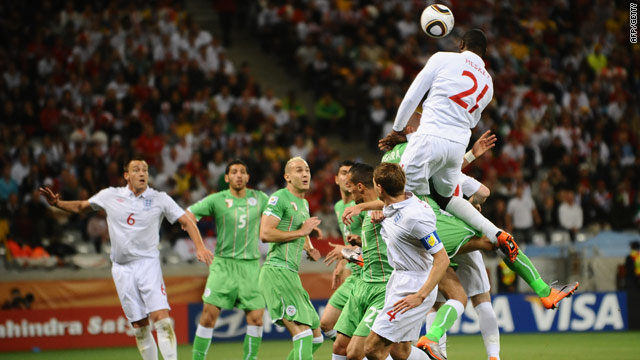 The man, 32, was arrested Sunday morning at a Cape Town hotel following an investigation, police said in a statement. He was not identified.

The man allegedly appeared in the dressing room following the World Cup match between England and Algeria, authorities said. The two played to a goalless draw at Green Point Stadium in Cape Town.

"The South African Police Service initiated an investigation into the incident immediately after it was reported to us at a debriefing after the match," according to the statement. Surveillance camera footage was analyzed, allowing authorities to identify the man and trace him to the hotel.

"The National Prosecuting Authority of the Department of Justice has cooperated fully with the South African Police Service on this investigation and has assured us that the individual will appear in court to face the charge of trespassing some time today," police said Sunday.

England's Football Association formally complained to World Cup organizers following the incident. No one was harmed and the fan wasn't in the dressing room for long, but FA spokesman Mark Whittle told CNN Saturday the security breach was "not acceptable."

Security personnel including police will be placed within the inner perimeter of stadiums in World Cup host cities to prevent similar incidents from taking place, authorities said.

British news outlets reported the breach happened moments after Britain's Princes William and Harry had left the dressing room. William serves as president of the FA and the brothers both watched the game from the stands.

A member of FIFA escorted the fan from the premises, according to police.