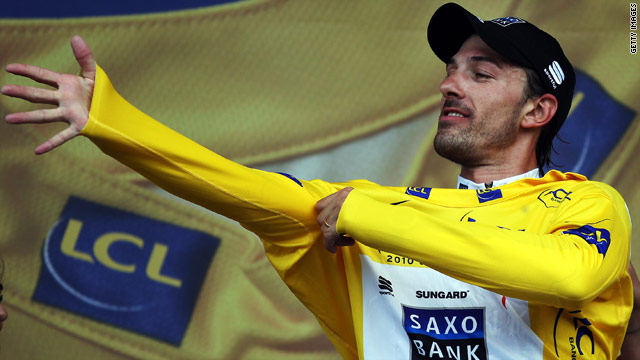 (CNN) -- World time-trial champion Fabian Cancellara has won the opening yellow jersey of the Tour de France for the third time in six years as cycling's premier event began with a prologue in the Netherlands on Saturday.

The Swiss rider was the third-to-last of the 197 competitors to tackle the 8.9-kilometer time trial in Rotterdam as the 97th edition of the race got under way in wet conditions.

Britain's David Millar took third place for the Garmin team in a time of 10:20 while seven-time champion Lance Armstrong, starting his final Tour, was fourth for RadioShack another two seconds back.

Britain's Olympic pursuit champion Bradley Wiggins, who was fourth overall last year, was a disappointing 56 seconds off the leading pace as leader of Team Sky.

Climbing specialist Andy Schleck, another rider expected to contend for the title, was more than a minute adrift back in 122nd.

It was the first time the prologue had been held since the 2007 race, which began in London.

Sunday's first stage is a 223.5-kilometer run from Rotterdam to the Belgian capital of Brussels -- the start of 20 legs concluding with the victory leg into Paris on July 25.