Armstrong Tour bid 'over' after disastrous day in the Alps 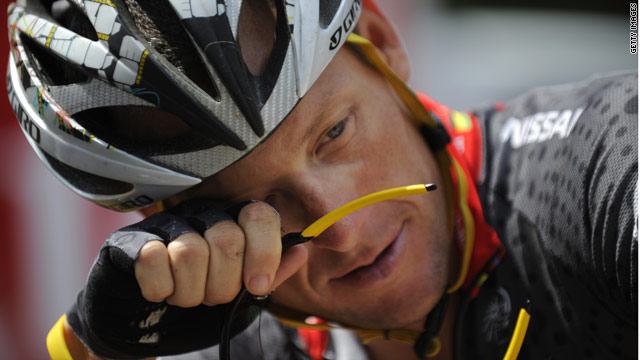 A weary Armstrong was left trailing by the other leading contenders on the eighth stage of the Tour de France.
STORY HIGHLIGHTS

Australia's Cadel Evans took over the race leader's yellow jersey, leading Schleck by just 20 seconds, with defending champion Alberto Contador in third place, one minute and one second down.

Armstrong, riding in his last Tour de France, crashed twice and also got held up as another rider took a tumble on a disastrous day for him and his Radioshack team.

The 38-year-old American, sporting a bandage on his right arm, came in over 11 minute down on the leading group, crossing the line shortly after Sylvain Chavenel of France, who held the yellow jersey going into Sunday's stage.

"My Tour is over," Armstrong told AFP.

"But I will stay in the race. I will enjoy it, I'll try and take some pleasure out of it, to support the team. I'm not complaining."

Armstrong took his first tumble just after the start and the second, at high-speed, on the approach to the Col de la Ramaz.

"It's already hard to come back, hard on the body," he added.

My Tour is over
--Lance Armstrong
RELATED TOPICS

With Armstrong struggling, Contador's Astana team set a ferocious pace on the final two climbs of the 189-km stage from Station des Rousses to Morzine-Avoriaz as they reeled in a breakaway group.

But the Spaniard himself was distanced in the final kilometer by Schleck and compatriot Samuel Sanchez.

Saxo Bank team leader Schleck outsprinted Sanchez to take his first win of the year and establish himself as a major challenger to Contador for the overall honors.

"This puts me in a great position," he told Eurosport.

World champion Evans and Contador finished in the nine-strong chasing group, 10 seconds behind, which contained most of the other leading contenders, but Britain's Bradley Wiggins, fourth last year, lost one minute 45 seconds after cracking three kilometers from the finish.

Schleck, second behind Contador last year, saw his brother Frank crash out on the cobbled third stage in Belgium, but helped by teammate Fabian Cancellara, boosted his challenge by finishing in the leading group that day.

Armstrong also lost valuable time on the third stage as he punctured at a crucial moment, but he went into Sunday's stage with hopes very much alive until the wheels came off in dramatic style.

Teammate and compatriot Levi Leipheimer salvaged some pride for the Radioshack line-up by finishing eighth on the stage and their focus will now be on him for the remainder of the Tour.