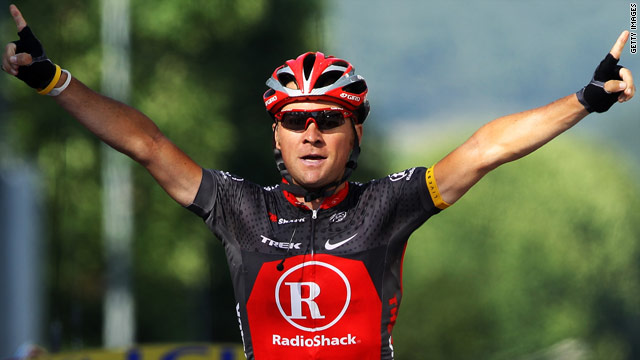 Portugal's Sergio Paulinho celebrates as he records his first ever Tour de France victory for the RadioShack team.
STORY HIGHLIGHTS

Paulinho narrowly held off Vasil Kiryienka of Belarus after both riders launched a bid for the line with 14km of the stage remaining.

The peloton never threatened to go with the pair and rolled in at their leisure, with Paulinho becoming the first Portuguese stage winner since Acacio Da Silva in 1989.

It brought some comfort to his RadioShack team, led by American Lance Armstrong, who conceded his chances of winning the Tour disappeared over the weekend.

Andy Schleck's overall lead was never threatened during the 179km stage from Chambery to Gap, while the home crowd could not celebrate a local winner in sweltering temperatures on Bastille Day.

It was not a day for me to do anything. Even if it was quite up and down, there was nothing for me to achieve.
--Andy Schleck
RELATED TOPICS

The top ten riders in the general classification standings were unchanged meaning race leader Andy Schleck made sure he retained the yellow jersey for another day.

Paulinho, who won a silver medal at the 2004 Olympics in the road race, was part of a six-man break and only a determined sprint prevented Kiryienka picking up Belarus' first ever Tour win.

"It was a close sprint but the most important thing is to win and so this moment, for me and my team, is a good one," Paulinho told the official Tour de France website. "I hope that in the coming days the team can achieve a few more victories.

"For me this victory is more important than the silver medal in the Olympic Games. This is the best race in the world and to win one stage in the Tour is the pinnacle of what a cyclist can achieve."

Overall leader Schleck was pleased with a comfortable day in the saddle: "It was quite an easy day even if it was fast at the beginning. It was a breakaway day so we took it kind of easy behind.

"Okay, there was a lot of wind so the team had to do some work all the way to Gap but it wasn't too stressful. I had a little bit of time to enjoy my first day in the yellow jersey.

"It was not a day for me to do anything. Even if it was quite up and down, there was nothing for me to achieve."