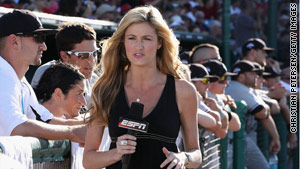 (CNN) -- Sports reporter Erin Andrews has filed a lawsuit alleging the hotels where a peephole stalker secretly videotaped her were negligent, according to a statement from the law firm representing her.

The lawsuit also accuses Michael David Barrett, who has pleaded guilty to stalking the ESPN reporter, of invasion of privacy and intentional infliction of emotional distress.

The suit, filed Thursday, alleges that Barrett received information from hotels when he called them to see if Andrews had made reservations to stay there.

"Not only did the hotels confirm that Ms. Andrews was intending to register as a guest, but they also released, without Ms. Andrews' consent, her room number. The hotels then provided Michael David Barrett a hotel room immediately adjacent to hers," the statement from law firm Greene, Broilett & Wheeler said.

"Although I'll never be able to fully erase the impact that this invasion of privacy has had upon me and my family, I do hope that my experience will cause the hospitality industry to be more vigilant in protecting its guests from the time they reserve a hotel room until they check out," Andrews said in a statement Thursday.

She said she filed the lawsuit "to hold accountable those who put my personal safety at risk and who allowed my privacy to be invaded while I was a guest at their hotel, as well as for actually stalking me and making my most personal moments public."

Barrett pleaded guilty to a federal stalking charge in December 2009 after prosecutors accused him of altering hotel peepholes so he could shoot video of Andrews while she was nude. In court papers, prosecutors stated that Barrett -- an insurance company employee from Westmont, Illinois -- posted as many as 10 videos of Andrews to the internet.

In March, a federal judge in Los Angeles, California, sentenced Barrett to two and a half years in prison.

Andrews' civil suit, filed in the Circuit Court of Cook County, Illinois, accuses the hotels of negligence, negligent infliction of emotional distress and invasion of privacy.