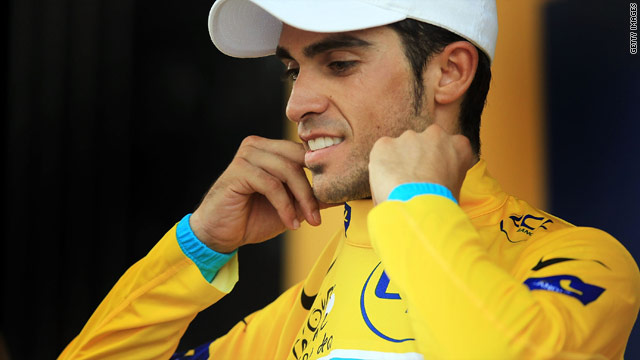 (CNN) -- Defending champion Alberto Contador has issued an apology after he took advantage of his rival Andy Schleck's mechanical failure to seize the yellow jersey in the Tour de France.

Schleck, who was leading Astana rider Contador by 31 seconds in the overall standings going into stage 15 on Monday, dropped his chain while launching an attack on the day's final climb and had to stop to repair the problem.

Rather than waiting for his rival -- in keeping with the Tour's sporting traditions -- Contador and a group including fellow contenders Denis Menchov and Samuel Sanchez stole a march to the finish, gaining 39 seconds on Schleck.

Contador now leads Saxo Bank's Schleck by eight seconds in the overall standings, with Spain's Sanchez two minutes behind the leader in third and Russia's Menchov two minutes, 13 seconds back.

Spaniard Contador was booed by the French crowd as he was awarded the yellow jersey on the podium and was heavily criticized by Schleck.

But after reflecting on the stage, Contador issued a video on Youtube saying: "The race was in full gear and, well, maybe I made a mistake. I'm sorry.

"At a time like that all you think about is riding as fast as you can. I'm not happy, in the sense that, to me, fair play is very important.

"The kind of thing that happened today is not something I like, it's not my style and I hope my relationship with Andy will remain as good as before."

Luxembourg's Schleck, the runner-up to two-time champion Contador last year, was angered by what he saw as a lack of "fair play" and vowed to take "revenge" on his rival.

"In the same situation I would not have taken advantage," Schleck said, AFP reported. "I'm not the jury, but for sure those guys wouldn't get the fair play award from me today.

In a similar situation in 2003, Germany's Jan Ullrich was praised for his sportsmanship after he waited for Lance Armstrong to recover from a collision with a spectator in the Pyrenees.

Armstrong then surged forward to win the stage by 40 seconds en route to the fifth of his seven Tour victories.

The 187.5 kilometer stage from Pamiers to Bagneres-de-Luchon - the second of four stages in the Pyrenees - was won by French champion Thomas Voeckler after a fine solo ride, finishing nearly three minutes ahead of the race favorites.