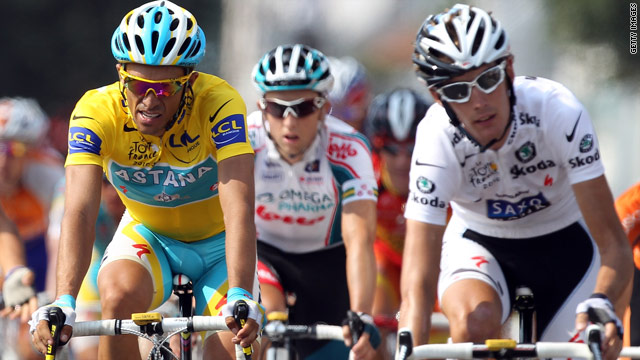 Alberto Contador (L) and rival Andy Schleck have drawn a line under their row over a dropped chain in the Tour de France.
STORY HIGHLIGHTS

(CNN) -- Andy Schleck drew a line under his row with leader Alberto Contador after France's Pierrick Fedrigo fought off a challenge from Lance Armstrong to win stage 16 of the Tour de France.

Contador apologized to his rival after sprinting ahead when Schleck dropped his chain during an attack on the stage's final climb. The Spaniard ignored the Tour's sporting traditions by refusing to wait and was booed by the crowd.

After gaining 39 seconds Contador issued an apology on Youtube, while Schleck vowed to take his revenge.

But after finishing the 199.5km stage between Bagnere-de-Luchon and Pau on Tuesday Schleck diffused the situation, turning his attention to Thursday's crucial Tourmalet stage, where he will bid to snatch the lead from Contador.

He told the Tour's official website: "I haven't seen the footage of Alberto's apology but he came to me today and personally apologized and I appreciate that a lot.

"He knows that he made a mistake yesterday; he shouldn't have done that, he knows it and, for me, that's enough now. This case is closed and people should stop with it and move on. Nobody deserves to be chastised endlessly.

This case is closed and people should stop with it and move on. Nobody deserves to be chastised endlessly.
--Andy Schleck on Alberto Contador
RELATED TOPICS

"I'm still motivated but it's not like it's revenge. I just want to win this Tour -- that's my goal -- and I know there's only one chance left and that's the Tourmalet [on Thursday]. I think I can do it. I hope I can do it."

Contador added: "Today I talked with Andy because I wanted to make things clear. We have always had good relations and I do not want them to be damaged by what happened yesterday.

"We have explained ourselves and I think our relationship can become as good as it was before."

Fedrigo, from the Bbox team, outsprinted a seven-strong group, including six-time winner Armstrong, to record his third stage victory on the Tour.

He finished ahead of compatriot Sandy Casar and Spain's Ruben Plaza, while Armstrong took sixth place. It is now five years since the American's last stage victory.

Carlos Barredo made the first dash for the line with more than 40km to go in the stage, but he ran out of steam and was caught by Fedrigo's group with a little over 1km to go.

As Fedrigo burst from the line Armstrong tried to keep pace but couldn't maintain his challenge. He told reporters afterwards: "It was harder than I expected. It's been a while since I sprinted and I was just not quick enough."

Fedrigo was delighted with his win. He told the Tour's official website: "I would have been very disappointed to finish this Tour without finding myself in a position to play to win. I was really afraid of not succeeding.

"The Tour passes so quickly and so far I did not answer the call I'd issued myself. Last night I even cracked a little and my nerves were a bit frayed. But perhaps that's what I needed in order to regain confidence.

"In the end, [Lance] Armstrong told me that he would not cooperate with me because he knew I was the fastest group."