Maradona: I was lied to and betrayed 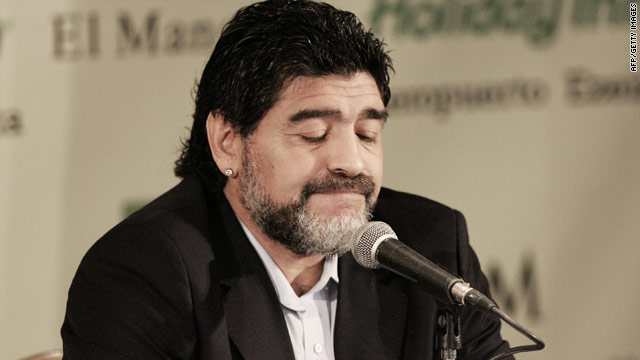 Diego Maradona claims he was betrayed by AFA General Manager Carlos Bilardo over his decision not to renew his contract.
STORY HIGHLIGHTS

Argentina's 4-0 loss to Germany in a quarterfinal match put the team out of the World Cup competition.

After the team's elimination, according to Maradona, Grondona told him, "in the presence of witnesses and players, that he was very content with the work done and that he wanted it to continue."

But once the team returned to Argentina, "Grondona told me that he wanted me to continue as the coach, but that seven people from my coaching squad would have to go," Maradona said Wednesday. "That was impossible for me to agree to do."

He added, "I have different codes and morals than they do; my parents taught me that."

Maradona said that, "while we were in mourning, Bilardo was working in the shadows to throw me out."

After reading from a prepared speech for 12 minutes, he left without taking questions as many of the assembled journalists applauded.

After meeting with officials at AFA headquarters in Buenos Aires, Grondona told reporters that he had not lied to Maradona. Though the two men had talked about change, "it was not my intention to open the exit door for him," he said.

He said he did not understand how Maradona could believe he was betrayed. "We were looking for some change, not to get rid of Maradona," he said.

Bilardo said he would respond next week to Maradona's accusations.

CNN's Brian Byrnes and Guillermo Fontana contributed to this story.