Lemaitre sprints to 100m gold as Chambers misses on medal 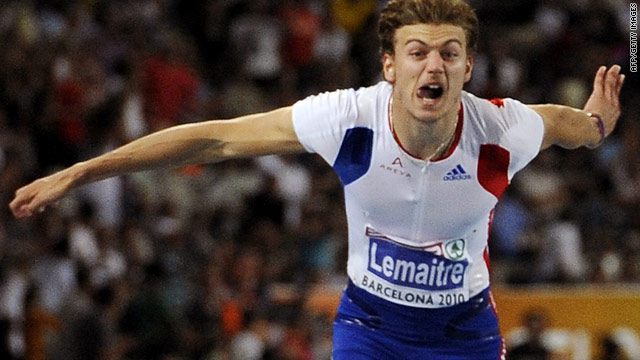 Christophe Lemaitre timed his run to perfection before lunging for the line to beat his rivals in a tight finish.
STORY HIGHLIGHTS

(CNN) -- Young French sprinter Christophe Lemaitre confirmed his growing reputation as a track star with a confident 100-meters victory at the European Athletics Championships in Barcelona on Wednesday night.

The 20-year-old, the first white man to break 10 seconds at the distance, timed his run to perfection as his main rival Dwain Chambers of Britain missed out on a medal in a tight finish.

Lemaitre came home in a winning time of 10.11 seconds to take the gold, with Chambers' teammate Mark Lewis-Francis handed silver in a four-man photo finish from Martial Mbandjock, another Frenchman.

I was worried at the start, but after that I ran the kind of race I normally run
--Christope Lemaitre
RELATED TOPICS

"I gave it everything I had, it was a very good race," Lemaitre, who was fastest in the earlier semifinals in 10.06, told reporters.

"I was worried at the start, but after that I ran the kind of race I normally run. I knew I had a chance of a medal, even winning gold."

Chambers, the current world indoor 60m champion who won relay gold in Stockholm four years ago on return after his ban for drug use, put on a brave face after his disappointing finish.

"I had to rely on my experience, which kept me relaxed, but it wasn't enough to win. I've just got to keep on ploughing at it until my opportunity prevails," said the 32-year-old, who won silver in 1998 and then had to return his gold in 2002 after being caught using steroids.

Lemaitre's heat featured another strong performance from Irish Paralympian Jason Smyth, who is the first legally blind athlete to compete at the European Championships.

The partially-sighted 23-year-old finished fourth in the eight-man heat in a time of 10.46, but even his personal best of 10.32 would not have been enough to reach the final.

Abeylegesse won silver medals in the distance at the 2008 Olympics and 2009 world championships.

Russia had a clean sweep of the medals in the women's 20-kilometer walk, as Olympic and world champion Olga Kaniskina went one better than her silver in 2006.

Anisya Kirdyapkina, 21, took the silver while Vera Sokolova claimed bronze as the Russians followed up the victory of teenage compatriot Stanislav Emelyanov in the men's race on Tuesday.

Latvia's Ineta Radevica claimed a shock gold in the women's long jump, with the 29-year-old heading off Portugal's 2006 silver medallist Naide Gomes in a tie-breaker after both leaped 6.92 meters.

Olga Kucherenko was third in 6.84 while her fellow Russian and defending champion Lyudmila Kolchanova was back in fifth on 6.55.

Former Olympic heptathlon champion Carolina Kluft was 11th of the 12 finalists on 6.33.

Germany's Nadine Muller, who has thrown the furthest this year with 67.78 in May, finished back in eighth on a disappointing 57.78.