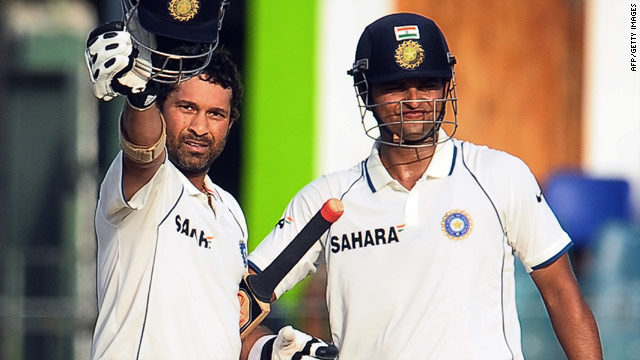 (CNN) -- Sachin Tendulkar extended his world record to 48 Test centuries as India battled to avoid the follow-on in the second match of the series against Sri Lanka in Colombo on Wednesday.

He had added 141 with debutant Suresh Raina, who also reached stumps with a patient 66 off 131 balls.

Tendulkar came to the crease with India having lost two quick wickets following an opening stand of 165 by Virender Sehwag and Murali Vijay.

India had resumed on 95-0 in reply to Sri Lanka's 642-4 declared, and Sehwag raced from his overnight 64 to 99 before being denied his 21st Test century when he was stumped by wicketkeeper Prasanna Jayawardene off the bowling of Suraj Randiv.

The offspinner is making his debut following the retirement of world record-holder Muttiah Muralitharan after Sri Lanka's win in the opening match of three in Galle.

Ajantha Mendis then trapped Vijay for 58 before Randiv dismissed Rahul Dravid in similar fashion for three.

Tendulkar survived a dropped catch by Jayawardene off Dilhara Fernando when on 29 as he added 68 with V.V.S. Laxman, who became the second lbw victim of Mendis at 241-4 just before the end of the middle session.

He smashed Randiv down the ground for six to bring up his 56th Test half-century, which took 115 deliveries, and he then accelerated as he swept the same bowler to the boundary for his ninth ton against Sri Lanka.

Tendulkar is now nine centuries ahead of his closest rival, Australia captain Ricky Ponting, with South Africa's Jacques Kallis next on 35.

He hit 14 fours in a 181-ball knock, including one from the final delivery of the day from Mendis.