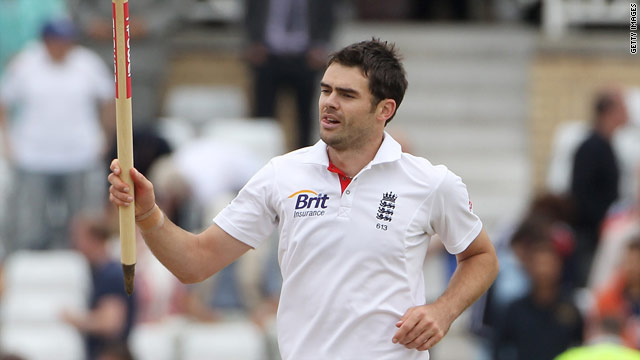 James Anderson claimed a souvenir of a stump after his match-winning 11-wicket bag against Pakistan.
STORY HIGHLIGHTS

(CNN) -- James Anderson claimed his first 10-wicket haul in Test cricket to fire England to a 354-run victory over Pakistan in the first clash of the four-match series in Nottingham.

The swing bowler ended with figures of 11-71 as his 6-17 from 15 overs helped bundle the tourists out for just 80 before lunch on Sunday, sealing a comprehensive triumph with more than a day to spare.

Pakistan had resumed the fourth day on 15-3 in pursuit of what would have been a world-record victory target of 435, but slumped to the team's lowest total on English soil after lasting just another 22 overs.

Anderson took five of the seven wickets to fall in helpful bowling conditions, while Steven Finn chipped in with two to match Chris Broad's effort the day before as England needed only those three bowlers to complete the demolition job.

The first game against Australia was a bit like this. We must remember we won the second game, so this will help us make a strong comeback
--Pakistan captain Salman Butt
RELATED TOPICS

"It's a great feeling -- I've only done it once before in first-class cricket," said Anderson, who has now taken 28 wickets in four Tests at Trent Bridge.

"It's not been my greatest summer so far, but I always felt I was bowling well through the one-day series, even though the figures might have shown otherwise. Here I got the nicks and the catches in the slips."

Pakistan, whose top scorer was No. 10 batsman Danish Kaneria with 16 not out, crashed back to earth following the three-wicket win over Australia which leveled that series at 1-1.

But captain Salman Butt was confident his side could again bounce back in the second Test at Edgbaston starting on Friday, having lost the opening match against the Australians by 150 runs.

"The first game against Australia was a bit like this. We must remember we won the second game, so this will help us make a strong comeback," Butt said at the post-match award presentation.

"This is a young side with limited experience, but they have the talent. There's not that much difference between the sides in batting -- had we held onto our chances England would not have run away with this match."

Pakistan dropped leg-spinner Kaneria after his match figures of 1-171 and recalled former captain Mohammad Yousuf to boost the team's batting options and brought in 18-year-old slow left-arm bowler Raza Hasan for what could be his international debut.

Yousuf, 35, retired from the national team after being handed an indefinite ban in March following a morale-sapping whitewash in Tests and one-dayers in Australia.