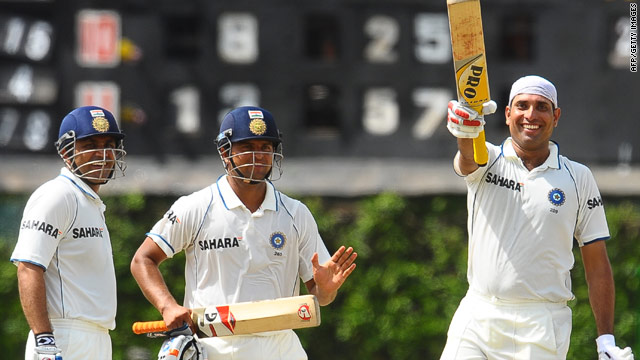 (CNN) -- India tied the three-Test series with Sri Lanka after V.V.S. Laxman overcame back problems to score an unbeaten century on the final day of the deciding match in Colombo to seal a five-wicket victory.

Set 257 to win, the top-ranked tourists made it home comfortably following a fourth-wicket partnership of 109 between Laxman and veteran batsman Sachin Tendulkar, with Suresh Raina's 41 off 45 balls completing a fine turnaround.

Laxman followed up his first-innings 56 as he ended the match unbeaten on 103 from 149 balls, scoring his 16th Test ton despite needing the help of a runner.

"He proved today why he is called very, very special," Indian captain Mahendra Singh Dhoni told reporters. "He always comes up with innings that have a huge bearing on the game.

I was in such pain that I thought that the best decision was to have a runner instead of just giving away the wicket
--V.V.S. Laxman
RELATED TOPICS

"It was very important for him to score runs as the team needed it most to level the series. I think it is a very special innings. Hopefully, he plays plenty more innings like this for us."

Laxman, a veteran of 113 Tests, said he had struggled to keep momentum due to his back pain.

"I started my innings well, but during the partnership I had a lot of discomfort and the spasms didn't allow me to move freely. Once I was into my 30s it became very painful," he said.

"It was difficult. You don't want to create confusion and also not break the rhythm. If you see, Sachin got out once I took the runner. But I was in such pain that I thought that the best decision in team's interest was to have a runner instead of just giving away the wicket due to pain."

Sri Lanka captain Kumar Sangakkara said the turning point was when his side were bowled out for 267 in their second innings the previous day.

"If we had just tried to bat till lunch, the ball would have got softer and we could have scored a lot more runs. But unfortunately, we played some poor strokes," he said.

"Otherwise we could have batted out the day and put the heavy roller on today and declared."

Tendulkar had been dropped by a close fielder when on 18 also off Randiv, who claimed his first five-wicket haul in just his second outing after coming in to replace retired world record-holder Muttiah Muralitharan.

Raina, who scored 120 on debut in the previous drawn Test, hit the winning runs with a six off Chanaka Welegedara just before the scheduled tea break.

Meanwhile, Pakistan reached 19-1 at stumps of the second day of the second Test against England, having bowled out the hosts for 251 in Birmingham.

Pakistan, all out for a paltry 72 in their first innings, are still 160 runs away from making England bat again at Edgbaston.

The hosts resumed on 112-2 on Saturday, but spinner Saeed Ajmal took his first five-wicket haul to restrict the deficit. However, Pakistan's bowling options were hit when seamer Umar Gul was ruled out of the rest of the match with a torn hamstring.

Kevin Pietersen returned to form with 80, but had a lucky escape on 41 when he was given not out in bizarre circumstances.

The South Africa-born batsman pulled away from the crease just before Mohammad Asif was about to deliver the ball, signaling he had been distracted by movement behind the bowler.

But then he offered a shot after all and chipped a catch to Pakistan captain Salman Butt, who could not persuade umpire Marais Erasmus to change his decision of "dead ball."

James Anderson later took his fifth wicket of the match as Butt went without scoring.