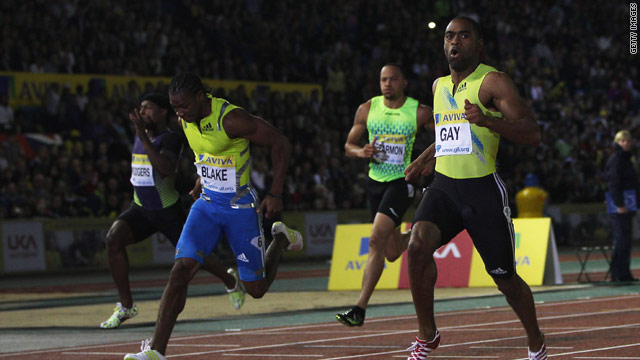 Tyson Gay (right) powers away from his rivals to clock a superb time of 9.78 seconds in the 100m in London.
STORY HIGHLIGHTS

(CNN) -- Tyson Gay underlined his status as the fastest sprinter in the world at the moment by clocking the quickest 100m of the season in London's Diamond League meeting on Friday.

With world and Olympic champion Usain Bolt out for the remainder of 2010 because of a back injury, American Gay -- who beat the Jamaican in Stockholm last week -- continued that form with a blistering performance in damp and miserable conditions.

Gay clocked a time of 9.78 seconds to leave another Jamaican, Yohan Blake, and Richard Thompson of Trinidad trailing.

"I just prayed to get through the race healthy because my groin was getting a little tight. I had to make sure I stayed warm so I didn't pull anything," Gay told reporters.

"I tweaked it in the heat but I think it's OK. It's been a good week. I have a great team surrounding me and it's my third victory here in London."

The race line-up was weakened earlier in the week when former world record holder Asafa Powell as forced to withdraw from the meeting with a back injury.

In other races, home fans were left disappointed when a host of Britain's European gold medallists failed to follow up on those recent victories.