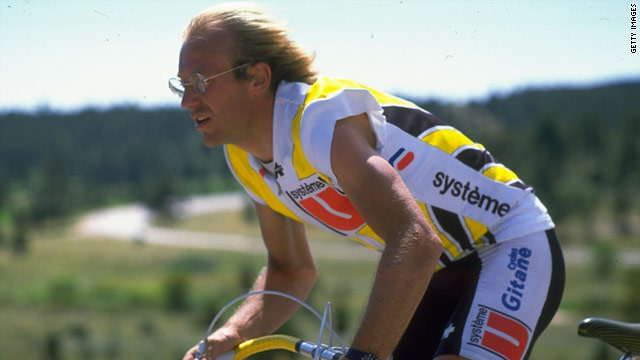 Laurent Fignon was one of the greatest cyclists of all time, twice winning the Tour de France.
STORY HIGHLIGHTS

Fignon won the Tour in 1983 and 1984 but was perhaps most famous for the 1989 contest, when he was beaten by Greg Lemond by only eight seconds -- the smallest winning margin in the history of the race.

The Frenchman actually held the lead going into the final stage time-trial into Paris, but he let his advantage slip to allow American Lemond to snatch victory in the most dramatic finish ever seen.

As well as his two Tour victories, Fignon won nine stages and held the leader's yellow jersey for 22 days.

His other big race successes included two wins in the Milan-San Remo one-day classic and two stage wins in both the Giro d'Italia and Vuelta Espana.

Fignon was a colorful character on and off the bike, famous for his flowing blond hair and glasses, and was also regarded as an anti-establishment figure.

In his autobiography, "We Were Young and Carefree", Fignon admitted taking amphetamines and cortisone during his career but did not establish a direct link with his cancer.

"In those days everyone was doing it," he explained in his book. "But it is impossible to know to what extent doping harms you.

It was a privilege to share some time with Fignon in Paris. Rest in peace.
--Alberto Contador
RELATED TOPICS

"Whether those who lived through 1998, when a lot of extreme things happened, will get cancer after 10 or 20 years, I really can't say."

Meanwhile, tributes for Fignon have poured in from the world of cycling.

Defending Tour de France champion Alberto Contador led the tributes on his Twitter page, saying: "Today we lost a great champion, Laurent Fignon, after a hard struggle. It was a privilege to share some time with him in Paris. Rest in peace.

Lance Armstrong, who himself battled cancer before becoming the greatest Tour de France champion of all time, said on his official website: "I awoke today to the terrible news that my dear friend and legendary cyclist Laurent Fignon has passed away.

"I will never forget the early 90's when I first turned pro, of course terrified of the older guys. Laurent was always a friendly face with words of advice. He was a special man to me, to cycling, and to all of France. Laurent, we will all miss you."

And fellow-American Lemond, whose name will always be linked with Fignon after their epic 1989 duel, echoed those sentiments.

"I will miss Laurent Fignon as a great person and competitor. A truly sad day for everyone whose lives he touched."

In later life, Fignon became a consultant for French television and commentated on the Tour de France in 2009 and 2010 despite the treatment he was receiving.