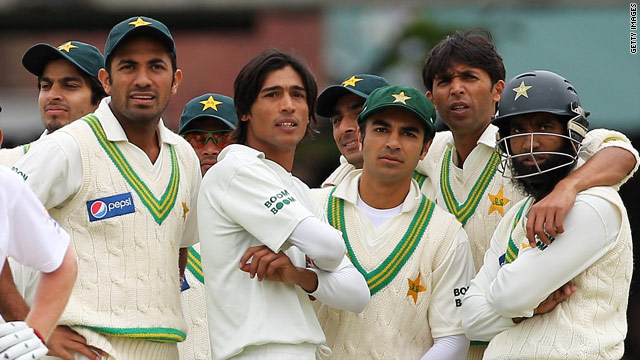 Pakistani cricketers have had their actions in a recent Test series with England put under scrutiny after claims of match-fixing.
STORY HIGHLIGHTS

London, England (CNN) -- The three Pakistani cricket players at the center of a betting scandal have been summoned to meet their country's top cricket authorities in London, England, where the alleged fixing took place, team manager Yawar Saeed told CNN on Tuesday.

Salman Butt, Mohammed Asif and Mohammed Amir may remain in London for two days for meetings with the chairman of the Pakistan Cricket Board, their manager said.

They have not been arrested, suspended, or summoned for further questioning by police, Saeed said.

Saeed made his remarks two days after allegations surfaced that gamblers fixed part of a Pakistan match against England last week.

Video: It's just not cricket

Separately, customs authorities said Tuesday that three people were arrested Sunday in connection with the scandal.

They were held on suspicion of money-laundering, a representative of Her Majesty's Revenue and Customs told CNN.

The head of cricket's world governing body said Tuesday he wants disciplinary action within days if anyone on the Pakistan team was involved in the alleged betting scheme.

Haroon Lorgat, chief executive of the International Cricket Council, said he wants any action taken by Thursday, if at all possible, an ICC spokesman told CNN.

"The integrity of the game is of paramount importance," Lorgat said in a statement. "Prompt and decisive action will be taken against those who seek to harm it. However, the facts must first be established through a thorough investigation and it is important to respect the right of due process when addressing serious allegations of this sort."

Investigators from the ICC, the sport's governing body, are already in the United Kingdom making inquiries into the allegations, the council said Tuesday.

The investigators, from the council's Anti-Corruption and Security Unit, are working with London's Metropolitan Police on their criminal investigation, the council said.

Federal investigators from Pakistan had been expected to arrive in England on Tuesday to look into the alleged scandal, but Pakistani Interior Minister Rehman Malik later said their plans changed.

"We have requested Interpol and Scotland Yard to provide us with [the] preliminary report, and we have asked for permission to send our team there," Malik told CNN. "The moment we get permission, we will send them."

Lorgat said that if any players are found guilty, "the ICC will ensure that the appropriate punishment is handed out. We will not tolerate corruption in this great game."

The alleged scandal came to light Sunday when a British tabloid newspaper reported that two Pakistan players deliberately bowled "no balls" -- fouls -- during their four-day series with England.

A "no ball" is when the bowler -- the equivalent of a pitcher in baseball -- steps over the line as he unleashes the ball. The batting team gets a run when that happens.

The News of the World posted video of what it said was an undercover reporter meeting with a man identified as Mazhar Majeed, who tells the reporter exactly which bowlers will bowl "no balls" and when, then lays out 14 thick stacks of bills on a table.

The video of the meeting -- which the newspaper said took place Wednesday, the day before the match between Pakistan and England began -- is intercut with clips from the following two days, where the players perform as Majeed said they would.

The Met Police said a 35-year-old man was arrested late Saturday on suspicion of conspiracy to defraud bookmakers and released on bail Sunday.

Police said no date had been set for a hearing or further proceedings, but that the investigation was continuing.

Saeed did not name the two players questioned by police, but Britain's Press Association earlier reported he identified them as bowlers Mohammad Amir and Mohammad Asif.

Police refused to confirm to CNN who was being questioned.

The Pakistani players at the center of the scandal were free to leave the country, police said Monday.

Team captain Butt said Pakistan gave 100 percent throughout the match. "We have given our best," Butt said after his team lost to England.

The team manager refused to comment on the report that Pakistan players intentionally committed three fouls during the match.

"No allegations are true until they are proved either way," said Saeed. "So that this point in time they are just allegations. Let's wait until the case is complete."

England beat Pakistan in the four-day match at Lord's Cricket Ground, which ended Sunday afternoon, after the scandal broke.

He directed the chairman of the Pakistan Cricket Board to submit a preliminary report "immediately," Farhatullah Babar said, adding that Zardari asked to be kept informed about any British investigations as well.

It is the second allegation of corruption directed at the Pakistan cricket team this year.

Betting on cricket matches is legal in England.

CNN's Melissa Gray in London, England, and Samson Desta in Islamabad, Pakistan, contributed to this report.