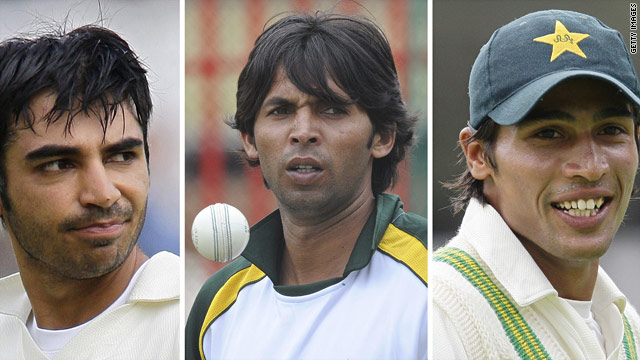 London, England (CNN) -- A scheduled meeting between Pakistani cricket authorities and three of their country's national players over an alleged betting scandal has been postponed for a day, the team manager told CNN on Wednesday.

He gave no reason for the change.

The players -- Salman Butt, Mohammed Asif and Mohammed Amir -- were due to head to London on Wednesday morning from Taunton, England, where their squad is preparing for a match against the local team, Somerset, Saeed said.

The three players are at the center of the betting allegations, which emerged Sunday in a British tabloid. They and Saeed were already questioned by London's Metropolitan Police over the scandal, he said earlier this week.

The newspaper, the News of the World, reported that two Pakistan players deliberately bowled "no balls," or fouls, during their test series with England in London last week. It said the alleged ringleader made 150,000 pounds ($232,800) in the scam.

A 35-year-old man was arrested late Saturday on suspicion of conspiracy to defraud bookmakers and released on bail Sunday, Met Police said. They said no date had been set for a hearing or further proceedings, but that the investigation was continuing.

Three people were also arrested Sunday in connection with the scandal and held on suspicion of money-laundering, a representative of HM Revenue and Customs told CNN.

The head of cricket's world governing body said Tuesday he wants prompt disciplinary action if anyone on the Pakistan team was involved in the alleged betting scheme.

"The integrity of the game is of paramount importance," said Haroon Lorgat, chief executive of the International Cricket Council. "Prompt and decisive action will be taken against those who seek to harm it. However, the facts must first be established through a thorough investigation and it is important to respect the right of due process when addressing serious allegations of this sort."

Investigators from the cricket council are already in the United Kingdom making inquiries into the allegations, the council said Tuesday. They are working with the Met Police on the criminal investigation, according to the council.