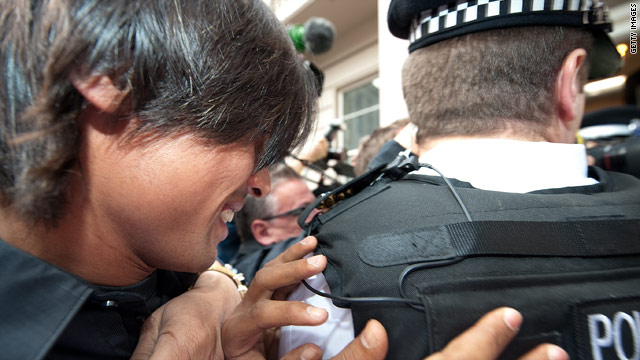 London, England (CNN) -- British police Friday questioned three players from the Pakistani national cricket team at the center of an alleged betting scandal that has rocked the sport.

"At no time were they placed under arrest. They were free to leave any time and they have answered all of the questions that were put to them and have been released without charge or conditions," Robertson said.

Metropolitan Police said that their investigation is not complete and that the three players could be called back for further questioning.

Police launched a criminal investigation after the British tabloid News of the World first reported the allegations Sunday. It claimed two players were involved in spot-fixing during Pakistan's Test series with England last week.

Spot-fixing involves deliberately throwing parts of a game, rather than the whole match. The paper alleged the players deliberately bowled "no balls," or fouls, at specific points in the game and that the alleged ringleader pocketed 150,000 pounds (about $230,000) in the scam.

The ICC would not give details of the charges, but said they come from the code's Article 2, which relates to fixing or influencing cricket matches, and to bribes and betting on the game.

Robertson said Pakistan's cricket organization and the three players were cooperating with both the police and ICC investigations and would continue to do so.

"They look forward to a timely and satisfactory outcome," she said, adding that there would be no further comment.

We think we have arrived at a position where certainly players have a case to answer
--Ronnie Flanagan, head of the ICC's anti-corruption unit
RELATED TOPICS

Ronnie Flanagan, who heads the ICC's anti-corruption unit, cautioned that the players have not been found guilty.

"We think we have arrived at a position where certainly players have a case to answer," Flanagan said at a news conference in London on Friday.

The players may appeal the ICC's decision.

The ICC has said it is in close contact with police. Lorgat told reporters he does not believe the incident reflects a more widespread problem, and Flanagan thanked the tabloid for exposing possible corruption.

"If these charges are proven, I congratulate what the News of the World has done in bringing that to light," he said.