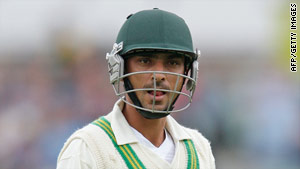 Yasir Hameed says he turned down a bribe he was offered to rig cricket matches, according to a British tabloid.
STORY HIGHLIGHTS
RELATED TOPICS

The News of the World, a tabloid known for using undercover video and other unorthodox methods, says it secretly filmed cricket player Yasir Hameed on Tuesday, two days after it claimed three players had been involved in a scam run by gamblers.

Speaking Urdu on the video released by the newspaper, Hameed says he turned down bribes to rig matches or behave in a certain way at specific points in matches. The newspaper put English subtitles on the video and edited it. CNN confirmed that the translation is accurate but has not seen the unedited video.

In the video, the cricket player says he "blanked" the man accused of rigging parts of a match in London in August.

"It's fate. I was saved by God," Hameed says on the tape.

He does not name the alleged fixer.

Hameed believed he was speaking to a public relations agent when the video was shot in a hotel in Nottingham, central England, News of the World representative Hayley Barlow told CNN Sunday.

Hameed in the statement said he was approached by someone who identified himself as Abid Khan to discuss a sponsorship possibility with Etihad Airways. Hameed said he discovered that the man was actually News of the World reporter Mazhar Mahmood. The tabloid confirmed using the Abid Khan alias.

"As I saw him as a friend and potential agent, I naively started to answer his questions. He asked me about the match-fixing allegations against the current three Pakistani players and if I had any further knowledge. As far as I can recall, I only told him what I had already read in the newspapers about this matter. It seems Abid had a hidden camera which I was totally unaware of. "

He added that the man offered him 25,000 pounds ($38,508) to make a statement against his fellow players but that he refused. He said he later received a threatening text from the man that said, "Please call me. Incidentally you are in video drinking wine and saying all the quotes attributed to you. Denying it is just stupid as we will be replaying the video to TV. Better that you stand up and speak the truth!!!"

Hameed said he didn't respond to the text and brought the issue to the attention of the Pakistan Cricket Board.

National team manager Yawar Saeed declined to comment, and the Pakistani High Commission in London, which has been closely involved in the allegations since last Sunday, did not answer calls from CNN Sunday.

News of the World says the alleged fixer is Mazhar Majeed, and a source close to the investigation confirmed last week that London's Metropolitan Police arrested Majeed on suspicion of conspiracy to defraud bookmakers in the wake of the first newspaper report on the scandal.

He has since been released on bail. He has not been charged, but the investigation is continuing, police said.

Calls to his office were not answered on Sunday.

British police Friday questioned the three Pakistani players at the center of the alleged betting scandal.

"At no time were they placed under arrest. They were free to leave any time, and they have answered all of the questions that were put to them and have been released without charge or conditions," Robertson said.

The Metropolitan Police said that their investigation is not complete and that the three players could be called back for further questioning.

Police launched the criminal investigation after the News of the World first reported the allegations on August 29. It claimed two players engaged in spot-fixing during Pakistan's Test series with England last week.

Spot-fixing involves deliberately throwing parts of a game, rather than the whole match. The paper alleged the players deliberately committed fouls at specific points in the game and that the alleged ringleader pocketed 150,000 pounds (about $230,000) in the scam.

The ICC would not give details of the charges, but said they come from the code's Article 2, which relates to fixing or influencing cricket matches, and to bribes and betting on the game.

Robertson said Pakistan's cricket organization and the three players were cooperating with both the police and ICC investigations and would continue to do so.

"They look forward to a timely and satisfactory outcome," she said, adding that there would be no further comment.

Ronnie Flanagan, who heads the ICC's anti-corruption unit, cautioned that the players have not been found guilty.

"We think we have arrived at a position where certainly players have a case to answer," Flanagan said at a news conference in London on Friday.

The players may appeal any ICC decision.

Lorgat told reporters he does not believe the incident reflects a more widespread problem.

Several people have been arrested in connection with the case. The Met Police arrested a 35-year-old man August 28 on suspicion of conspiracy to defraud bookmakers and released him on bail the following day, and customs officials arrested three people that day on suspicion of money laundering.

CNN's Bharati Naik in London, England, and Samson Desta in Islamabad, Pakistan, contributed to this report.