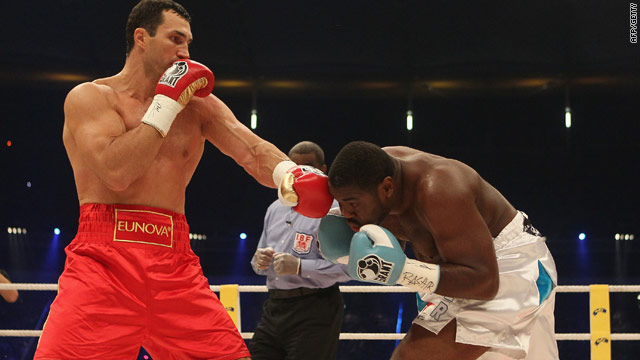 (CNN) -- Wladimir Klitschko successfully defended his WBO and IBF world heavyweight titles on Saturday after stopping Samuel Peter in the 10th round in Frankfurt, Germany.

Ukranian Klitschko dominated the fight from the first round, using his height and reach advantage to pepper Peter with stiff jabs, causing his right eye to swell from round two.

From the fifth and sixth rounds Klitschko upped the tempo, increasing his work rate to put pressure on Nigerian Peter, 29, who slowed and looked increasing tired as the rounds progressed.

Peter had already fought - and lost - to both Wladimir and elder brother Vitali Klitschko.

Five years ago, the younger Klitschko hit the canvas three times in Atlantic City before he won a unanimous decision against the African fighter

More than 50,000 fight fans packed the Frankfurt stadium on Saturday to watch what turned out to be a one-sided contest.