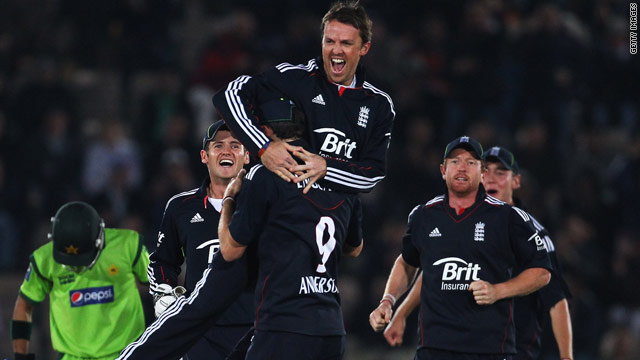 Graeme Swann was the hero for England as he took three wickets against Pakistan.
STORY HIGHLIGHTS

(CNN) -- An inspired spell of bowling from Graeme Swann handed England an emphatic win as they clinched the one-day series over Pakistan.

The hosts won by 121 runs as Pakistan collapsed to 135 all out chasing 257 for victory at the Rose Bowl to give them a 3-2 victory in the five-match series.

It draws a line under a controversial tour that has been dogged by allegations of match fixing. Three Pakistan players -- Salman Butt, Mohammad Aamer and Mohammad Asif -- were suspended by the International Cricket Council (ICC) over the claims in a British newspaper.

Just a few days ago England reacted furiously to claims by Pakistan Cricket Board chairman Ijaz Butt that they had received "enormous sums of money" to deliberately lose the third one-day international at The Oval.

England's players threatened to sue Butt unless he withdrew his comments and the final two games of the series were played among simmering tensions between the two teams.

England won the toss and batted first at the Rose Bowl, but were thankful to Eoin Morgan's superb knock of 107 not out to help them to a competitive total of 256-6. Morgan was ably assisted by Paul Collingwood's innings of 47.

Pakistan started well as Kamran Akmal and Mohammad Hafeez put on 61 but two wickets in two balls from Stuart Broad changed the course of the game.

And spinner Graeme Swann took the game away from Pakistan with a spell of 3-26 off nine overs. It was left to Morgan to take the clinching catch off Broad's bowling as England wrapped up their win.

After the match England captain Andrew Strauss told Sky Sports: "The summer has definitely been tough at times, especially during this series, which has been the hardest I have ever played in.

"We've been in some tough places in the last few weeks, it has been a crazy series and one that hopefully will never be repeated again."

Pakistan will fly home on Thursday and their captain Shahid Afridi said: "It has been a difficult time. I can say the main positive thing was the way we stayed united."