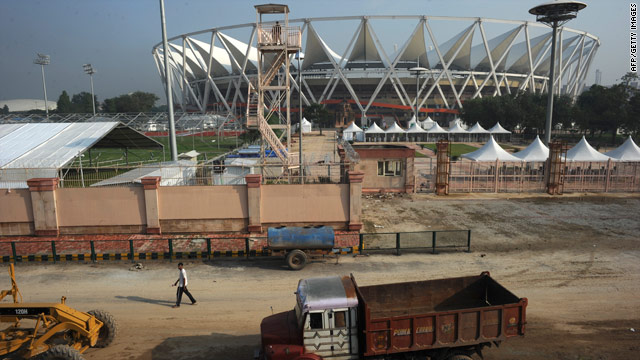 Organizers are scrambling to pull together the Commonwealth Games, which are to start on October 3 in New Delhi.
STORY HIGHLIGHTS

New Delhi, India (CNN) -- India's home minister said Friday that security and maintenance issues have been squared away ahead of the staging of the Commonwealth Games, which are beset by a myriad of problems.

P. Chidambaram told CNN that all security issues have been addressed and that every participating team has categorically said they are fully satisfied with security.

The minister also said the midnight Friday deadline to clean up the venues has been met. He said 10 of the 11 village venues have been taken over by security, and another will be taken over shortly. More than 1,000 cleaners entered the athletes' village Friday, armed with brooms, mops and other cleaning supplies to get the facility into shape.

Organizers are scrambling to pull together the Commonwealth Games, which are to start October 3 in New Delhi. India's ability to host the games was questioned after a bridge collapse and criticism of the athletes' village as uninhabitable and filthy. Some countries have threatened to pull out of the competition.

Commonwealth Games President Mike Fennell was to meet Indian Cabinet Secretary K.M. Chandrasekhar in New Delhi late Friday afternoon to discuss the troubled preparations for the games, which take place every four years among members of the former British empire.

The list of countries that will compete has been in flux, as teams awaited updates on construction and hygiene at games sites. Canada, New Zealand and Scotland had delayed their teams' departures for the event.

A spokesman said Friday that Scotland's team would depart for India the next day, and the New Zealand Olympic Committee said its athletes would depart two days later than planned.

"I am certainly pleased to arrive in Delhi with the news that Australia has moved into the village to get ready for the arrival of their athletes and with the confirmation late yesterday that England and Wales will be on their way to Delhi shortly," Fennell said in a news release Friday afternoon.

He was to tour the village on Friday for a firsthand look.

Welsh athletes were reassured by the games' organizers, the Commonwealth Games Council for Wales said.

"The advance party will now be moving into our accommodation, and we look forward to welcoming our athletes in the coming days," the Welsh council said in a news release.

Worldwide criticism and stepped-up involvement by higher-level Indian officials at the last minute appeared to help the games turn the corner. A private cleaning company also was hired to do the deep cleaning of the athletes' housing. Earlier in the week, photos showed soiled rooms that included excrement and animal footprints.

When you agree to host an Olympic Games, you are required to provide the basics in terms of health and hygiene for the athletes.
--Australian Olympic Committee chief
RELATED TOPICS

Australia's Olympic Committee leader said Friday that the Commonwealth Games should not have been awarded to India, considering how preparations have gone, but the clock is ticking and it's time to move ahead.

"I don't think it is a cultural thing," committee President John Coates told the Australian Broadcasting Corporation, "When you agree to host an Olympic Games, you are required to provide the basics in terms of health and hygiene for the athletes. I'm very aware, having hosted a games, and I don't think you reduce yourself to the lowest common denominator."

Security questions also emerged after two visitors from Taiwan were injured by gunmen who fired on a tourist bus in New Delhi on Sunday.

In Australia, a travel advisory has been issued for India, warning of a high risk of terrorism in New Delhi.

Such concerns led New Zealand cyclist Greg Henderson to announce his withdrawal from the games on Friday.

"It was just mainly a decision my wife and I made involving the safety and security of the games," he said from Melbourne, Australia, where he was training for other events.

Photos of soiled rooms at the games venues made them uneasy, he said.

"I didn't think it was a risk I would like to take," Henderson said, also referring to security concerns and his being the father of a 13-month-old girl.

A handful of other athletes have withdrawn from the games over safety and hygiene concerns. They include Australia's Dani Samuels, the world discus champion, and Canadian archers Kevin Tataryn and Dietmar Trillus.