Pedrosa out as Lorenzo closes on title 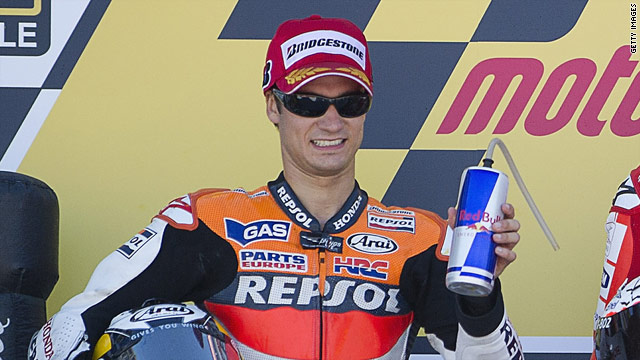 Dani Pedrosa has suffered a broken collarbone and is set to miss the next three races.
STORY HIGHLIGHTS
RELATED TOPICS

(CNN) -- Spanish rider Dani Pedrosa suffered a broken collarbone after crashing out of a practice session for the Grand Prix of Japan on Friday, effectively handing the MotoGP world title to compatriot Jorge Lorenzo.

Pedrosa, who races for the Repsol Honda team, has a double fracture of his left collarbone and is now set to miss the next three races.

Lorenzo currently leads the standings, and with his countryman being his only real rival for the sport's top prize, he looks set to finish the season on top.

Michele Macchiagodena, MotoGP Medical Director, told the sports official website: "When he (Pedrosa) crashed he suffered a multiple fracture of the left collarbone, and that requires an operation to have the best chance of returning to racing as soon as possible."

Yamaha's Lorenzo currently has a 56 point lead in the championship, and with his rival set for a three-week layoff, it looks likely he will be confirmed as champion before Pedrosa's projected return at Valencia, Spain on November 7.

It was initially feared the 25-year-old may have also sustained an injury to his left ankle, but Macchiagodena has allayed those concerns.

"We X-rayed the ankle as well and it is okay. He had old fractures but nothing new, just a small contusion", he said.

The 23-year-old Lorenzo is looking for his first world title at MotoGP level, although he has twice earned that accolade in the 250cc category, first in 2006 and again in 2007.