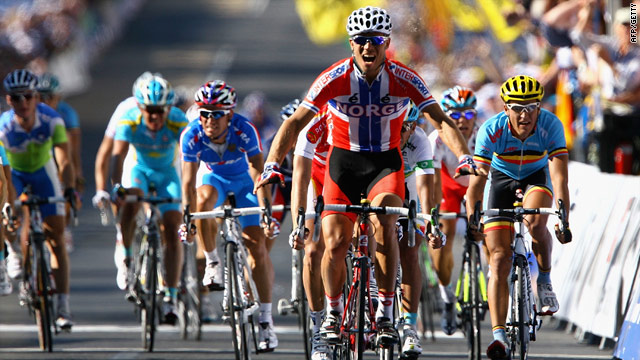 Thor Hushovd stays ahead of the bunch to claim the world road race title in Australia.
STORY HIGHLIGHTS

(CNN) -- Thor Hushovd won a bunch sprint from a whittled down leading peloton to claim the blue riband men's road race title at the world championships in Australia on Sunday.

Hushovd is the first Norwegian to win the coveted crown as he relegated Denmark's Matti Breschel and home hope Allan Davis to the minor podium positions after 262.7 kilometers of racing around Melbourne.

Breschel now has a silver to add to his bronze of 2008 while Davis could not quite emulate the feat of compatriot Cadel Evans who was defending his title in front of home crowds.

Hushovd, a former green jersey winner at the Tour de France and one-day classics expert, timed his charge for the line perfectly.

"It's hard to understand I've won the worlds. It's a dream, it's unreal," he told AFP.

It's hard to understand I've won the worlds. It's a dream, it's unreal
--Thor Hushovd
RELATED TOPICS

"This has to be the best moment of my career."

The race started and finished in two different locations with the last of 11 laps bringing the riders to the suburb of Geelong.

Belgian Philippe Gilbert made his bid for victory on the final 15.9 km circuit and looked set to stay clear until being caught near the end by a small group of chasers, including Evans who rode brilliantly in his title defense.

But in turn they were reeled in by the bunch, in which Hushovd and his teammate Edvald Boasson Hagen played their full part in bringing it back.

A number of leading favorites had fallen by the wayside before the final lap, including world time trial champion Fabian Cancellara of Switzerland and Britain's sprint ace Mark Cavendish.

It was the final race of a championship which have been overshadowed by the news of positive drugs tests for Tour de France champion Alberto Contador and a number of other star riders, who were not riding in Australia.

Contador has been provisionally suspended by the International Cycling Union (UCI) after his positive test for traces of clenbuterol was revealed Friday.

He insists he is innocent and told Spanish television on Saturday night that he was "very optimistic" that he will be cleared.