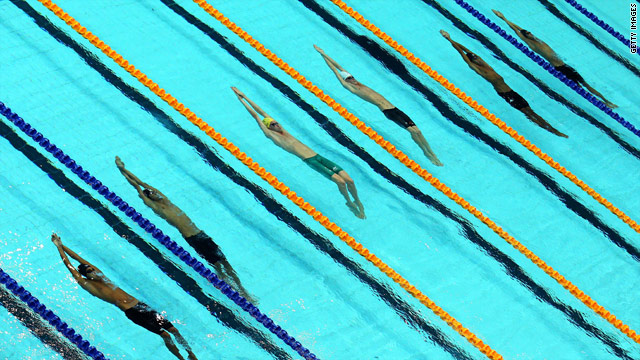 Competitors in a heat of the Men's backstroke 50m on Monday.
STORY HIGHLIGHTS

(CNN) -- After a fraught buildup and the razzmatazz of the opening ceremony, the real action gets underway Monday at the Commonwealth Games in Delhi.

Going for gold will be around 5,000 athletes from 71 countries, competing over the next 11 days in 17 sports.

Eight gold medals will be awarded today; one in gymnastics, two in weightlifting and five in swimming, with English swimmer Rebecca Adlington expected to add to her Olympic gold medal won in Beijing in 2008.

At the end of the competition it's the usual suspects of Australia, England and Canada that are expected to top the medal table, while hosts India are hoping to at least secure fourth place, as they have in the last two competitions in Melbourne and Manchester.

India's sole gold medallist from the Beijing Olympic Games, Abhinav Bindra, who carried the flag at the opening ceremony, will also be carrying the weight of the nation's expectations of securing gold on home turf.

On Wednesday the fireworks and dancers from the opening ceremony at the Jawaharlal Nehru Stadium will give way to track and field athletes, but there will be a few notable absentees.

A lower back problem has prevented Jamaican sprint superstar Usain Bolt, the world record holder over 100m and 200m, from competing.

South Africa's 19-year-old world 800m champion Caster Semenya did not make it to the Indian capital also because of injury.

The need to rest and recover after a long season has been the reason other medal favorites have given for missing the Games. Former sprint world record holder Asafa Powell, pentathlete Jessica Ennis and distance runner Mo Farah have decided against traveling to Delhi.

Others however won't be appearing for personal reasons. England's Olympic Triple Jump medallist in the Triple Jump announced on Twitter that he decided not to travel to the Games because of safety concerns. South African long-jumper Khotso Mokoena who won silver at the Olympic Games in Beijing was passed fit by South Africa's medical team but reportedly refused to join the team flying to the Indian capital.

While some countries like Australia have hired private security companies and will be guarded by Australian federal police, an estimated 100,000 police and security personnel will be protecting the 17 competition venues as well as other Games-related sites.

As well as athletics and other Olympic events, squash, lawn bowls and rugby sevens make up the sports at the Games. The Games organizing committee will be hoping sporting excellence can dominate headlines over the next two weeks instead of the state of the sporting facilities and health and safety worries.