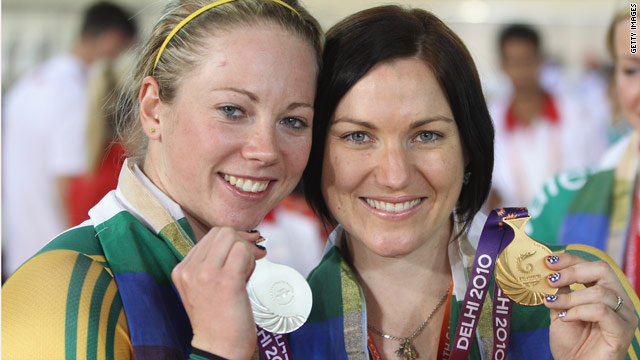 (CNN) -- Australia remained top of the Commonwealth Games medals table after the second day of competition in India following a clean sweep of the three cycling events.

Meares, who broke her neck in 2008, beat her own Games record in a time of 33.758 seconds to head off compatriot Kaarle McCulloch and Becky James of Wales.

Australia's swimmers won nine medals, but only Leiston Pickett struck gold following the country's haul of three titles in the pool on Monday.

Anil Kumar beat Hassene Fkiri in a stormy 96kg final which saw the Australian stripped of his silver medal, having aimed an obscene gesture at a judge after being disqualified for dangerous play.

India also won gold in the men's pairs 10m air rifle ahead of England and Bangladesh, and took out the women's pairs 25m pistol title from Australia and England.

But India, already embarrassed by technical problems in the weightlifting and boxing events plus reports that facilities will not be ready in time, suffered a humiliating record 113-18 defeat by world netball champions Australia.

The margin surpassed New Zealand's 116-26 victory against Sri Lanka in Manchester in 2002.

But the hosts made a better start in the men's field hockey, one of the nation's most popular sports, beating Malaysia 3-2 in a Pool A match after rivals Pakistan cruised past Scotland 3-0.

In Pool B, New Zealand thrashed Trinidad and Tobago 7-0 and South Africa won 4-1 against Canada.

In the women's hockey, Australia thrashed Trinidad and Tobago 11-0 and South Africa beat Scotland 2-1 in the other Pool A tie.

In the weightlifting, Canada's Marilou Dozois-Prevost won gold in the 53kg division despite a power cut which stopped the scoreboard operating.

Her overall total of 182kg was enough to head off U.S.-based Nigerian Onyeka Azike and Malaysia's Raihan Yusoff as she went one better than her silver medal in the 48kg class four years ago.