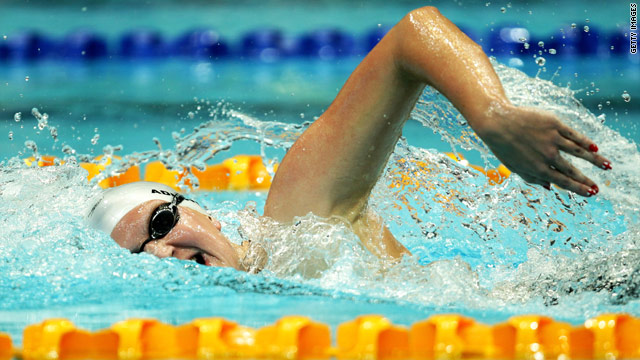 Olympic champion Rebecca Adlington has reached the final of the 800m freestyle despite suffering from illness.
STORY HIGHLIGHTS

(CNN) -- India's dreaded "Delhi belly" hit a number of top swimming stars, as Australia continued to dominate at the Commonwealth Games on Wednesday.

England's double Olympic champion Rebecca Adlington said she was struggling with illness ahead of Thursday's 800m freestyle final -- an event she won at Beijing in 2008.

Her teammate Fran Halsall almost collapsed on the podium after winning a disappointing bronze in the 100m freestyle and then failing to reach the final of the 100m butterfly.

Australia's Andrew Lauterstein pulled out of the men's 50m butterfly final due to a stomach complaint, but his compatriots won five more golds -- setting three records -- as the country moved to a leading 21 and 46 medals in total on day three of the event.

"It is hygiene-related," England team doctor Ian Gordon told the UK Press Association. "They have been assiduous in their personal hygiene, [using] alcohol gels. But everybody is going down with this acutely, and it just happened to hit Fran today."

Halsall, who won the 50m butterfly and aims to swim in the 50m freestyle heats on Thursday morning, saw Alicia Coutts win her second gold this week ahead of fellow Australian Emily Seebohm.

"I don't think I'm very well, to be honest. I had tummy issues last night, and they carried on through today. I just didn't have anything to give," she told reporters.

Adlington wrote on social networking website Twitter: "Got a bronze on the 4x200 tonight! Girls did amazing! Very proud! Hoping I feel better tomorrow though, not flash at the min!"

Leisel Jones retained her 200m breaststroke title for the third successive Games ahead of teammates Tessa Wallace and Sarah Katsoulis, while the highly-rated Seebohm won the 100m backstroke from England's world champion and world record-holder Gemma Spofforth in a Commonwealth best time.

Another new mark was set by England's James Goddard in the 200m backstroke as he regained the title he won in 2002.

I had tummy issues last night, and they carried on through today. I just didn't have anything to give
--Swimmer Fran Halsall
RELATED TOPICS

Australians continued to dominate the cycling, though Malaysia's Josiah Ng ended their clean sweep of golds by claiming the men's keirin title when his teammate Azizulhasni Awang was disqualified for dangerous riding after finishing first.

Hosts India remained second in the medals table with 11 golds, ahead of England on six, despite a disappointing day in the wrestling following Tuesday's clean sweep.

Rajender Kumar retained his men's 55kg title, thrashing Pakistan's Azhar Hussain 11-0 in the final, but Sunil Kumar could only manage bronze in the 66kg after losing to eventual winner Myroslav Dykun of England.

Manoj Kumar lost 7-2 to Nigeria's Joe Agbonavbare in the 84kg final, while Dharmender Dalal earned bronze in the 120kg division after failing to reach the final -- won by Australia's Ivan Popov, 8-0 against Talaram Mamman of Nigeria.

The athletics program, which has been depleted by the withdrawal of several top names, opened with Uganda's Moses Kipsiro winning the men's 5,000m, as he held off Kenya's former world champion Eliud Kipchoge, the fastest over the distance this year.

The men's 100m glamour event saw Jamaica's Oshane Bailey the fastest qualifier for Thursday's semifinals with a time of 10.12 seconds in the absence of his illustrious compatriots Usain Bolt and defending champion Asafa Powell.

Natasha Mayers of St Vincent and the Grenadines was the fastest in the women's 100m heats, but her 11.33 was a long way off the Commonwealth best of 10.9.

In the women's event, top seeds England beat Canada 4-1 in Pool B, and in Pool A defending champions Australia won 2-1 against India in a repeat meeting of the 2006 final.