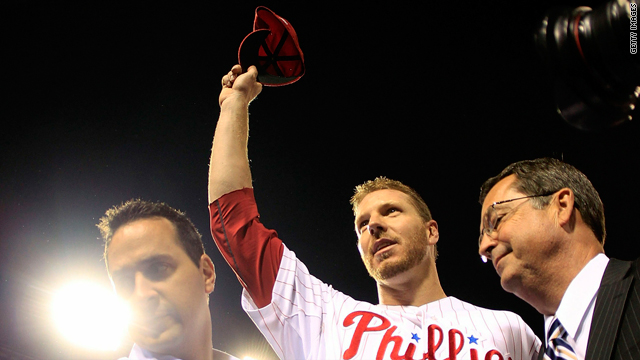 Roy Halladay #34 of the Philadelphia Phillies waves to the crowd after his no-hitter against the Cincinnati Reds Wednesday.
STORY HIGHLIGHTS
RELATED TOPICS

(CNN) -- Philadelphia Phillies pitcher Roy Halladay accomplished Wednesday night what only one other pitcher in the history of major league baseball has done: He pitched a no-hitter in the postseason.

It was the pitcher's first-ever postseason start, in front of a sea of Phillies red at Philadelphia's Citizens Bank Park.

"It's surreal," Halladay said immediately after Game 1 of the National League Divisional Series against the Cincinnati Reds. "I mean it really is. I just wanted to pitch in the postseason, and to be able to go out and have a game like that, it's a dream come true."

And Halladay was only one base-on-balls in the top of the fifth inning away from matching the New York Yankees' Don Larsen, who pitched a perfect game -- no batter reaching base -- against the Brooklyn Dodgers in the 1956 World Series.

But then, Halladay already had a perfect game under his belt -- May 29, when the Phillies beat the Florida Marlins 1-0. Prior to this season, he played for the Toronto Blue Jays, who never made it to the playoffs while he was there.

The Phillies scored the only run they needed in the bottom of the first inning on the way to a 4-0 win over the Reds. The team added three more runs in the second inning.