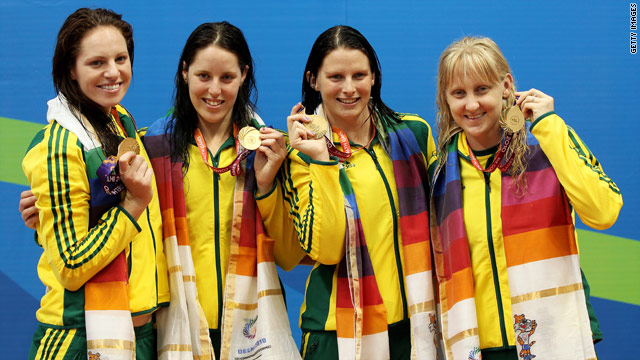 Emily Seebohm, Alicia Coutts, Leisel Jones and Jessicah Schipper have claimed a host of golds at the Games.
STORY HIGHLIGHTS

(CNN) -- Alicia Coutts led another Australian gold rush at the Commonwealth Games on Saturday with her fifth triumph in the swimming pool in New Delhi.

Coutts claimed her final victory of a stunning week in the 4x100m medley relay with teammate Emily Seebohn snatching her eighth medal of the competition.

Leisel Jones, who swam the breaststroke leg for the winning team after golds in the individual 100m and 200m, was claiming the 10th gold of her Commonwealth Games career.

It equals the Games record which she now shares with fellow Australian swim legends Susie O'Neill and Ian Thorpe.

"It is very special," she told AFP.

"Susie was here and saw the race and she was very gracious."

Coutts is the latest star on the Australian swimming production line with golds in the 100m freestyle, 100m butterfly, 200m individual medley and two relay events. Only four other athletes have won more golds in a single Commonwealth Games.

"I think I did pretty well but coming here tonight on the bus I felt like dozing off," said the 23-year-old.

In other events, Australia's men claimed the 4x100m medley, after the 100m butterfly champion Geoff Huegill led off with a fine leg.

It was the second gold for the 31-year-old veteran who has had to shed 45kg in his return to competition.

Canada's Brent Hayden claimed the sprint double after taking the 50m freestyle crown to add to his 100m gold while Hannah Miley took gold for Scotland in the women's 400m individual medley to add to her European title.

Australia led the medals table with 55 golds, adding to their tally in the track and field competition Saturday as Fabrice Lapierre produced a world class performance to win the men's long jump with an 8.30 leap.

England and India are tied for second place in the medals table with 24 golds apiece but there was disappointment for the hosts as tennis cover girl Sania Mirza lost the women's singles final to top seed Anastasia Rodionova of Australia 6-3 2-6 7-6.

Singapore claimed their fourth gold as they won the team table tennis competition with a 3-1 win over England.