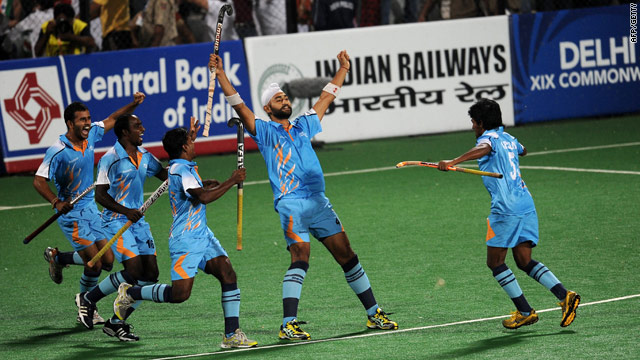 Sandeep Singh celebrates a goal as India thrash Pakistan in the field hockey preliminaries at the Commonwealth Games.
STORY HIGHLIGHTS

(CNN) -- Hosts India surged into second place in the medals table on Sunday with a mini-gold rush which at last drew large crowds to the crisis-ridden Commonwealth Games.

The Major Dhyan Chand stadium was packed to its 19,000 capacity to see India's field hockey team thrash neighbors Pakistan 7-4, with Sandeep Singh starring, to reach the semifinals of the competition.

"All credit to the crowd," India coach Jose Brasa told AFP. "Their support was tremendous, something I have never seen before in any match."

They will now play England with world champions Australia taking on New Zealand.

Their support was tremendous, something I have never seen before in any match
--India coach Jose Brasa
RELATED TOPICS

The athletics stadium was also over two-thirds full as women's 800m runner Tintu Luka won her semifinal in thrilling fashion and could win a rare track and field gold for India on Monday.

But golds did come for Somdev Devvarman in the men's tennis final and more followed in the wrestling, the most notable from Sushil Kumar in the 66kg category, and shooting events.

By the end of the day, India had won 29 gold to England's 26, but still well behind powerhouses Australian, who have 61.

Two more followed for the Aussies in the cycling events as Allan Davis and Rochelle Gilmore won their respective road race titles.

Sadly, the crowds did not flock to the roadside in New Delhi to watch world class performances from both, particularly Davis, who left pre-race favorite Mark Cavendish of the Isle of Man a well-beaten seventh in a brutal finish in blazing heat.

In the track and field, England's Leon Baptiste made his international breakthrough by claiming the men's 200m title while Kenya's Boaz Lalang led a clean sweep of the medals in the event for the East African country.

His compatriot and world record holder David Rudisha was one of a number of leading stars to skip the Games as Lalang took full advantage.

Another top class performance came from European champion Dai Greene in the men's 400m hurdles as he completed a golden double.

But there was more controversy involving officialdom as the women's 200m final failed to go ahead after fastest qualifier Elena Artymata of Cyprus was disqualified for running out of her lane.

She appealed but it was turned down and she will not take her place in Monday's final.