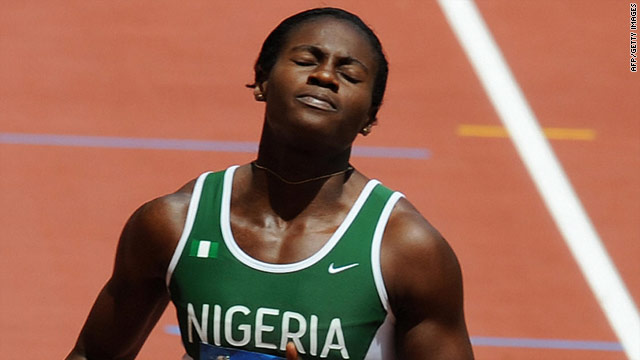 The Nigerian sprinter tested positive for a banned stimulant, Commonwealth Games Federation president Mike Fennell told reporters in New Delhi. Tests of Osayomi's B sample are being conducted and results will not be known until Wednesday.

The result is the first positive result from 950 completed tests at the Games so far, Fennell said, and showed Osayomi had methylhexaneamine in her bloodstream.

It is a substance used in nasal decongestants, and was added to the World Anti-Doping Agency's banned list this year -- having been at the center of the suspension of five Jamaican runners before the 2009 world athletics championships.

Osayomi, 24, was handed the gold medal in Thursday's race after Australian Sally Pearson was disqualified for a false start.

If Osayomi is disqualified Natasha Mayers of St Vincent and the Grenadines would claim gold, England's Kathryn Endacott would gain silver and Bertille Atangana of Cameroon would collect the bronze medal.

Mayers has already served a two-year ban for doping, having tested positive for testosterone in 2005.

Meanwhile, Pearson bounced back from her disappointment by winning gold in her main event, the 100m hurdles, on Monday.

The 24-year-old followed up her silver medal at the 2008 Olympics as she set a new Games record time of 12.67 seconds after comfortably heading off Canada's Angela Whyte and New Zealand's Andrea Miller, who snatched bronze with a dip at the line.

In another women's event mired in controversy, Cydonie Mothersill won a historic first Commonwealth gold medal for the Cayman Islands with victory in the 200m.

The 32-year-old, who was born in Jamaica, claimed her first major medal and the islands' second of any type following Kareem Streete-Thompson's long-jump bronze in 2002.

The final had been scheduled to be raced on Sunday, but was postponed after Cyprus appealed following the disqualification of hot favorite Eleni Artymata, but failed to have the runner reinstated.

Artymata, eighth at last year's world championships, won her semifinal but was ruled to have marginally, but illegally, run outside her lane.

Hosts India also made a breakthrough at Jawaharlal Nehru Stadium, with Krishna Poonia heading a clean sweep in the women's discus in the absence of world champion Dani Samuels.

Poonia's gold gave India a first track and field gold since 1952, and only second in Games history, while Harwant Kaur won silver and Seema Antil bronze.

Kenya's Nancy Langat also profited from the absence of a world champion as she completed a middle-distance double with victory in the women's 800m.

With South Africa's injured Caster Semenya ruled out of the Games, which finish on Thursday, Langat had little trouble in following up her 1,500m triumph with victory from New Zealand's Nikki Hamblin and Canada's Diane Cummins as teammate Winny Chebet missed out on a silver medal due to a late fall.

Kenyans continued their winning run in the men's steeplechase, which the country has dominated since 1990, with African champion Richard Mateelong claiming a surprise gold from world champion Ezekiel Cheboi and Olympic winner Brimin Kipruto.

Uganda's Moses Kipsiro sealed a long-distance double as he added 10,000m gold to his 5,000m success, with Kenya's Daniel Salel and Joseph Birech second and third.

World and Olympic pole vault champion Steve Hooker retained his title as Australia stayed well clear at the top of the medals table on day nine with 64 golds and 143 overall.

In field hockey, women's champions Australia beat England 1-0 to set up a final clash with New Zealand, who defeated South Africa by the same score.

Canada's Alexandre Despatie won his eighth Commonwealth gold since 1998, with the 25-year-old following up Sunday's 1m springboard success with victory in the 3m event from compatriot Reuben Ross and Australia's Grant Nel.

Despatie will seek another medal when he teams up with Ross in Tuesday's 3m synchro competition.