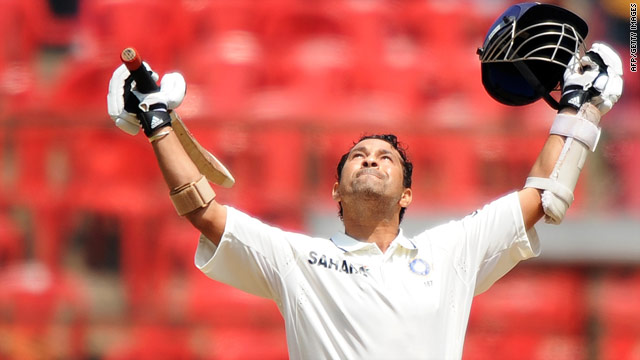 Veteran batsman Sachin Tendulkar celebrates after adding yet another century to his world record on Monday.
STORY HIGHLIGHTS

(CNN) -- Sachin Tendulkar celebrated his ICC cricketer of the year award with another remarkable innings on Monday which should ensure that India wins the two-Test series against Australia if the pitch in Bangalore holds up.

The 37-year-old batted throughout Monday's play as he moved from 44 to an unbeaten 191, just nine runs short of his sixth double-century in what is his 171st Test appearance.

On Sunday, he became the first player to reach 14,000 runs in Tests -- just days after winning the International Cricket Council's top award for the first time in his illustrious career.

He extended his world record to 49 centuries as he passed three figures with consecutive sixes off spinner Nathan Hauritz, helping India to 435-5 at stumps in reply to Australia's first-innings 478.

We saw signs of deterioration in the wicket at the end. Some kept low, a couple jumped. We have to wait and see what happens tomorrow
--Mitchell Johnson
RELATED TOPICS

Tendulkar, who fell just short of his seventh Test ton this year in India's first Test victory in Mohali, extended his third-wicket partnership with Murali Vijay to 308 runs.

Tendulkar named cricketer of the year

The opener scored his maiden Test hundred before falling to fast bowler Mitchell Johnson in the 101st over for 139 as the left-armer took two wickets in four balls in the final session.

Debutant Cheteshwar Pujara hit Johnson to the boundary from the second ball he faced, but was then trapped leg before wicket with the next delivery that kept alarmingly low.

Captain Mahendra Singh Dhoni was unbeaten on 11 as he and Tendulkar negotiated their way to stumps, with India still 43 runs short of the tourists ahead of the final two days.

Tendulkar was particularly harsh on Hauritz as he scored his 11th Test ton against the Australians, with the off-break bowler conceding 153 runs from his 39 overs.

The "Little Master" smashed 20 boundaries to go with his two shots over the boundary ropes, and has now faced 319 deliveries.

Vijay was more sedate in what is only his eighth Test match, but also hit two sixes in his 310 balls faced -- though he should have been run out by Hauritz on 49 when he nervously scampered through for a single.

"It was a really special knock for me. It was a dream to play with Sachin. He helped me a lot and gave me pep-talks through the day," the 25-year-old told reporters.

"I was just focused on each ball and did not try to think too far ahead. I just want to do well whenever I get a chance."

Johnson, who won the ICC's top award last year, said Australia still had hopes of winning to level the series against the world's No. 1-ranked team.

"As a fast bowler, you want to see some bounce and carry, but this one was a bit too slow," he said. "We stuck through the day and got a few wickets in the end to put some pressure on them.

"We saw signs of deterioration in the wicket at the end. Some kept low, a couple jumped. We have to wait and see what happens tomorrow."