Commonwealth Games come to a close on high note for India 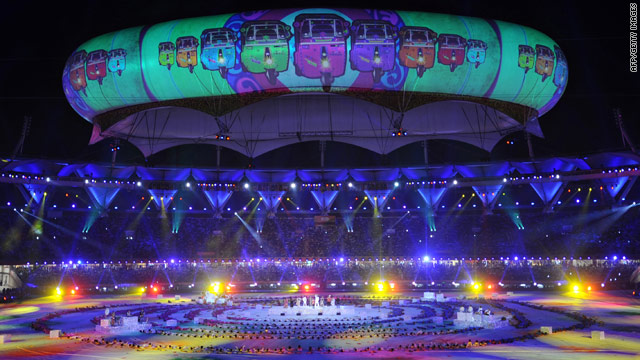 A glittering ceremony brought the Commonwealth Games to a close in New Delhi on Thursday.
STORY HIGHLIGHTS

(CNN) -- India's hosting of the 2010 Commonwealth Games ended on a high note on Thursday as badminton player Saina Nehwal won a dramatic final gold of the 11-day competition to put her country second in the overall medal table.

India had earlier suffered a humiliating defeat in one of its most popular sports when Australia registered a resounding 8-0 victory in the men's hockey final for a leading 74th gold medal and 177 in total.

But Nehwal came back from the brink of defeat to secure India's 38th victory, edging England into third place, as she won the women's singles event.

She became the first Indian to claim a Commonwealth gold in the sport, surviving a match-point in the second set before going on to beat Malaysian second seed 19-21 23-21 21-13 Wong Mew Choo.

All this has made what has turned out to be the largest, the most-watched and the most enjoyable Games ever
--Suresh Kalmadi
RELATED TOPICS

It was a much-needed boost for India, which had to deal with controversies about child labor, questions as to whether the venues in New Delhi would be ready in time, technology faults, disputed qualifications in athletics events and three positive drug tests -- one of whom was a home competitor, female walker Rani Yadav.

With the sporting events concluded, the chairman of the New Delhi Organizing Committee, Suresh Kalmadi, applauded his country's efforts during the handing-over ceremony to the 2014 host city, Glasgow of Scotland.

"For the athletes it has been a life-changing experience. For India it has been a new beginning in sports," he told the crowd at a packed Jawaharlal Nehru Stadium after being greeted with boos.

"For the world it has been evidence of what India can do on the sporting stage. This is a new era for Indian sport. All this has made what has turned out to be the largest, the most-watched and the most enjoyable Games ever."

Australia, the host four years ago in Melbourne, was the dominant country throughout the competition -- which is contested by nations from the former British Empire, but was hit this year by the absence of many top athletes such as sprint star Usain Bolt of Jamaica.

The Australian men's field hockey team has now won gold every time since the sport was first included, in Kuala Lumpur in 1998, and had little problems in brushing aside India on Thursday.

Luke Doerner and Jason Wilon scored two goals each as their team followed up their World Cup triumph at the same Major Dhyan Chand stadium in March to seal a hat-trick of titles in 2010 along with the Champions Trophy.

New Zealand won the bronze medal with a surprise victory over fourth seeds England, winning 5-3 in a penalty shootout after the match was tied 3-3 after extra-time.

However, Australia's world netball champions were unable to add Commonwealth Gold to their CV as longtime rivals New Zealand retained their title with a 66-64 victory in a rematch of the 2006 final.

Kenya edged out Australia as the top nation in the track and field events, winning both the marathon races on Thursday.

John Kelai ended the African country's 20-year wait to win the men's title as he triumphed in a time of two hours 14 minutes and 35 seconds from Michael Shelley and compatriot Amos Matui.

Irene Kosgei gave Kenya a historic first success in the women's event, edging past teammate Irene Mogake late in the race to win in a time of 2:34.32, with Australia's Lisa Weightman claiming bronze.

Singapore dominated the closing table tennis events, continuing a gold rush that saw their players give up just one gold -- to India in the men's doubles on Wednesday.

Robertson also had to settle for silver in the mixed doubles, despite being the top seeds, as he and Jenny Wallwork lost 22-20 21-12 by Koo Kien Keat and Chin Ee Hui, also of Malaysia.